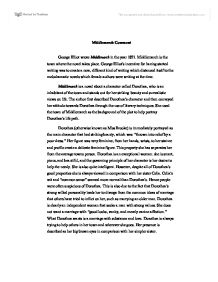 Middlemarch Comment George Elliot wrote Middlemarch in the year 1871. Middlemarch is the town where the novel takes place. George Elliot's incentive for having started writing was to create a new, different kind of writing which distanced itself to the melodramatic novels which female authors were writing at the time. Middlemarch is a novel about a character called Dorothea, who is an inhabitant of the town and stands out for her striking beauty and surrealistic views on life. The author first described Dorothea's character and then conveyed her attitude towards Dorothea through the use of literary techniques. She used the town of Middlemarch as the background of the plot to help portray Dorothea's life path. Dorothea (otherwise known as Miss Brooke) is immediately portrayed as the main character that had striking beauty, which was "thrown into relief by a poor dress." Her figure was very feminine; from her hands, wrists, to her stature and profile create a delicate feminine figure. ...read more.

George Eliot's perception in the novel is conveyed from the point of view of a woman writing about a woman. George Eliot clearly prefers the character of Dorothea describing her as a much more beautiful, intelligent and all round good person in the book as opposed to her sister. He uses compound sentences within the structure to convey this. Eliot doesn't fail to use this technique to portray the elaborate Dorothea. The author highlights Dorothea's unwillingness to compromise with the world through humor, and in doing so reveals Dorothea's naivety. This can be understood when Eliot writes "riding was an indulgence which she allowed herself in spite of conscientious qualms," Which was started to stress Dorothea's unconventional methods and attitude to a simpler minded individual. Even though Dorothea is the main character in the novel, Eliot seems to be very interested in her fate whilst she makes fun of her character and the rest of the world. ...read more.

However, the realization of her mistake in marring the man she chose would allow her to mature and become more sensible, and with her new point of view she will be able to lead her life in a more mature manner. In conclusion, we can see that George Eliot's main focus in the novel Middlemarch is to portray women in context of a rural society, and their views on marriage. She uses marriage to show woman's position in society during that century in such a small rural town. Dorothea is a exceptionally beautiful woman which has "childlike ideas about marriage" and is the main focus of the story which contrasts from her sister. This also shows what would happen when a woman in that century had different views on a topic such as marriage. This passage from Middlemarch, which was previously compared to Pride and Prejudice, confronts the way society reacts towards Dorothea and portrays the themes of marriage and feminism, in both cases from a female point of view ...read more.