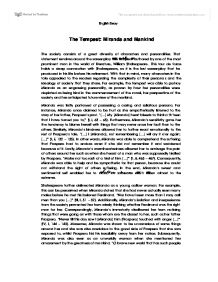 Miranda in The Tempest

The Tempest: Miranda and Mankind The society consists of a great diversity of characters and personalities. That statement revolves around the screenplay The Tempest authored by one of the most prominent man in the world of literature, William Shakespeare. This tour de force holds a deep connection with Shakespeare, as it is the last screenplay that he produced in his life before his retirement. With that in mind, many characters in the tale appealed to the readers regarding the complexity of their personas and the ideology of society that they share. For example, the Tempest was able to portray Miranda as an engrossing personality, as proven by how her personalities were depicted as being kind in the commencement of the novel, her perspective of the society and her anticipated future view of the mankind. Miranda was firstly portrayed of possessing a caring and solicitous persona. For instance, Miranda once claimed to be hurt as she empathetically listened to the story of her father, Prospero's past. "[...] My [Miranda] heart bleeds to think o'th'teen that I have turned you to," (I, i, 63 - 65). ...read more.

"Nor have I seen more than I may call men than you [...]" (III, I, 51 - 52). Additionally, Miranda's isolation and inexperience from the society prevented her from wisely thinking whether Ferdinand was the right man for her. Correspondingly, Miranda's immaturity disallowed her from noticing things that were going on with those whom are the closest to her, such as her father Prospero. "Never till this day saw I [Miranda] him [Prospero] touched with anger [...]" (IV, I, 144 - 145). Moreover, Miranda was shown to be unconscious of some things around her and she was also credulous to the good side of Prospero that she was exposed to, whilst Prospero hid his irascibility away from her notice. Subsequently, Miranda was also seen as an unworldly woman when she mentioned her amazement by the greatness of mankind. "O brave new world that has such people in't!" (V, I, 183 - 184). In another manner, Miranda's ingenuousness prohibited her from seeing the cruel truth within the society, hence she believed that all man worldwide is born good. ...read more.

"[...] and my father's precepts I therein do forget." (III, i, 58 - 60). Additionally, Miranda was already old enough to decide things on her own based upon what she learnt in her younger days. Nevertheless, she was never once independent as her way of thinking was technically always influenced by Prospero. Even as Miranda physically flourished into becoming the to - be lady of the to - be King of Naples, Ferdinand, her mentality never once grew up accordingly. There are multiple reasons as to why this occurred. First of all, the sequestered style of living that Miranda and Prospero had to go through restrained her apprehension of the world. Afterwards, this may be caused by the great influence that Prospero had over Miranda, which means that he could easily manipulate her way of thinking. Whichever way blossomed her into an unmellowed lady, it was indeed a successful way to do it. This occurrence can be related with what one of the world's leading biologists, Ernst Mayr avowed that "[...] when a drastic change occurs, it occurs in a relatively small and isolated population,". ?? ?? ?? ?? English Essay ...read more.