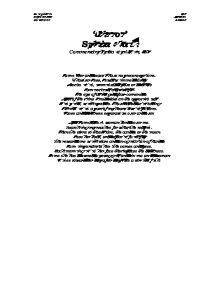 'Mirror' Sylvia Plath Commentary by Daisy Atkin, IB1 I am silver and exact. I have no preconceptions. Whatever I see, I swallow immediately. Just as it is, unmisted by love or dislike I am not cruel, only truthful - The eye of a little god, four-cornered. Most of the time I meditate on the opposite wall. It is pink, with speckles. I have looked at it so long I think it is a part of my heart. But it flickers. Faces and darkness separate us over and over. Now I am a lake. A woman bends over me. Searching my reaches for what she really is. Then she turns to those liars, the candles or the moon. I see her back, and reflect it faithfully She rewards me with tears and an agitation of hands. I am important to her. She comes and goes. Each morning it is her face that replaces the darkness. In me she has drowned a young girl, and in me an old woman Rises toward her day after day, like a terrible fish. The poem 'Mirror', written by Sylvia Plath, is a clear story of how one comes to fear the onset of old age. Plath uses reflective devices - the mirror and the lake, to reflect and ponder upon future and past. ...read more.

It's similar to when and anorexic person looks in a mirror - they see someone fat, when in truth they're sickeningly thin. I think that what Plath is trying to convey is that she is starting to question herself, and that she doubts herself. 'A woman bends over me. Searching for what she really is.' This line backs up the aforementioned statement, of Plath questioning herself and doubting herself. I think that she is trying to tell people how uncertain she is about herself, and about how worried she is, but that she can't actually find the words to say what she wants to. She probably feels alone and desperate for some company. The following line(s), 'Then she turns to those liars, the candles or moon. I see her back and reflect it faithfully', show a romantic allusion, candles frequently being associated with fine dining, first dates and romance in general, as does the moon, people often believe that a 'moonlight stroll' is appropriate with a loved one, along a beach somewhere etc. This would suggest to me that Plath sees her lovers, her loved ones as liars and possibly traitors. It seems to me that she considers her loved ones to have lied to her and to have pretended to be someone that they're not. ...read more.

Plath's diction and tone in the poem, as well as the rhythm show a slow, progressing tale, without much enthusiasm and vigour. The whole image that the poem gives off, after having read it through is a depressing one, like a mask that hides the poet's true feelings. I think that Plath is trying to hide behind this, and finds that this is the only way she can express her emotions. There is no sense of a 'stream-of-consciousness' effect. The poem is clearly laid out in two stanzas of nine lines each - this is ironic given that the other Plath poem we looked at 'Metaphors' had the line 'I am a riddle in nine syllables'. Plath obviously relates the number nine to a lot of things in her life. Whether this was her lucky number, or her birth date, or a special number to her, I do not know. The poem as a whole, I don't think is particularly interesting. It doesn't engage the reader, and it has no variation to it, unlike, for instance, the Thought-fox by Hughes, that uses enjambment to capture the reader's attention. Plath uses no devices that specifically capture the reader's attention, and this makes the poem as a whole very sombre, and almost boring. Personally, I don't like Plath's work anyway, but this poem in particular takes little interest from me, and I find it one of her lesser pieces of work. ?? ?? ?? ?? Daisy Atkin IB1 English A1HL Mr. John 23/11/2007 511581 ...read more.