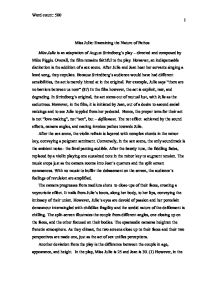 Miss Julie: Examining the Nature of Pathos Miss Julie is an adaptation of August Strindberg's play - directed and composed by Mike Figgis. Overall, the film remains faithful to the play. However, an indispensable distinction is the addition of a sex scene. After Julie and Jean hear her servants singing a lewd song, they copulate. Because Strindberg's audience would have had different sensibilities, the act is merely hinted at in the original. For example, Julie says "there are no barriers between us now" (87) In the film however, the act is explicit, raw, and degrading. In Strindberg's original, the act stems out of mutual lust, with Julie as the seductress. ...read more.

Conversely, in the sex scene, the only soundtrack is the ambient noise- the feral panting audible. After the bawdy tune, the fiddling fades, replaced by a violin playing one sustained note in the minor key to augment tension. The music stops just as the camera zooms into Jean's quarters and the split screen commences. With no music to buffer the debasement on the screen, the audience's feelings of revulsion are amplified. The camera progresses from medium shots to close-ups of their faces, creating a voyeuristic effect. It trails from Julie's boots, along her body, to her lips, conveying the intimacy of their union. ...read more.

In the play, Miss Julie is 25 and Jean is 30. (1) However, in the film, Jean appears in his fifties, sporting a balding dome and wrinkled forefront. To evoke indignity that Strindberg's audience would have experienced from solely the status discrepancy, an older man was cast. Moreover, Julie is waifish, with a patrician demeanour and a childlike vulnerability whereas Jean is stout and aging. Jean's unsightly appearance is an outward manifestation of his inferior status. The height difference symbolizes their class disparity. Before the act, Jean's face is nestled in her neck. After, Julie is slumped back, literally looking up to him, revealing the power shift that has just taken place, inviting the audience to commiserate with her plight as she wrings her hands in remorse. ...read more.