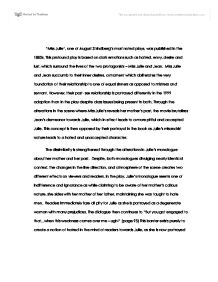 "Miss Julie", one of August Strindberg's most noted plays, was published in the 1880s. This profound play is based on dark emotions such as hatred, envy, desire and lust, which surround the lives of the two protagonists - Miss Julie and Jean. Miss Julie and Jean succumb to their inner desires, a moment which obliterates the very foundation of their relationship to one of equal sinners as opposed to mistress and servant. However, their post- sex relationship is portrayed differently in the 1999 adaption than in the play despite class issues being present in both. Through the alterations in the scene where Miss Julie's reveals her mother's past, the movie brutalizes Jean's demeanor towards Julie, which in effect leads to a more pitiful and accepted Julie. ...read more.

In the play, Julie's monologue seems one of indifference and ignorance as while claiming to be aware of her mother's callous nature, she sides with her mother of her father, maintaining she was taught to hate men. Readers immediately lose all pity for Julie as she is portrayed as a degenerate woman with many prejudices. The dialogue then continues to "But you got engaged to that...when this weakness comes over me - ugh!" (page 95) This banter exists purely to create a notion of hatred in the mind of readers towards Julie, as she is now portrayed as a heartless misandrist. Readers, find themselves siding with Jean as opposed to Julie, whose weakness for her desires causes her to make disastrous choices. ...read more.

Jean's reactions to Julie such as calling her a whore and demeaning her ancestors are not taken as well as it is in the play as viewers feel anger towards Jean's brash behavior. Both the book and the movie, attempt to expose the weakness within women, and both achieve so but within different contexts as one portrays the weakness in a positive manner and the other in a negative manner. Both the director and Strindberg use a similar ideal of the weakness within woman, yet portray them both within two different manners, one positive and the other negative. The difference harshen the relationship between Julie and Jean in the movie and create a more hated Julie in the play. ...read more.