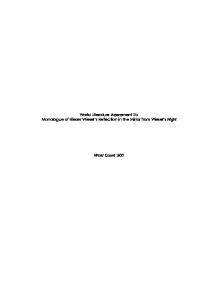 Monologue of Eliezer Wiesels Reflection in the Mirror from Wiesels Night

World Literature Assessment 2b Monologue of Eliezer Wiesel's Reflection in the Mirror from Wiesel's Night Word Count :900 At the end of Night, Wiesel acknowledges the "corpse" that gazed back at him from "the depths of the mirror." But how does he really feel about what had just happened? Does he feel relieved, exhausted, or maybe shameful? In this monologue, I attempted to portray Wiesel's inner conflict as he copes with what happened. He is nevertheless upset and disturbed by the events, especially by his failure to stand by his father's side when he needed him most. He reflects on thehorrors during his time in the concentration camp, Auschwitz-Birkenau, to the "death march" to Gleiwitz, and finally to the liberation of Buchenwald. During these three events, Elie witnesses the deteriorating bonds between father and son in which he too becomes a part of, although not as harsh and brutal as some accounts were. In addition, Elie explores the brutality of the Nazis' oppression. He blames their inhuman treatment of the Jews and he no doubt despises their ignorance to their suffering. ...read more.

It isn't supposed to be like this. It isn't supposed to end this way. As I looked in that deathly cracked mirror, I only saw a shell of my former self. What happened? Who am I from here? A living corpse, with no remorse or guilt for what I've lost? What have I lost? I lost my faith, I lost my trust in humanity, and worse of all, I lost my family. My father... what happened to him again? Oh yes, he fell to illness, to dysentery, just like the rest of them. And worse of all, he fell to them - them, those people that have caused us this suffering. Why did he have to be so weak? Why couldn't he be stronger? Why did he make me so angry, so burdened, so resentful to his presence? He's gone, and I didn't care. I didn't feel remorse; what did I feel? I felt freedom, even though the bottom of my heart told me I must show him some remains of my love and dedication. ...read more.

Father...it was my fault you were gone. It was my fault for not supporting you well enough and for not providing the proper love and support for you. What was worse was the fact that I had abandoned God. I couldn't hold onto Him in my heart. How could I when they desired for our deaths, saying that it is their own right to live, because they are not Jews, not like us? My heart stings with loss and from the pits of my stomach I feel something begging to break out. Is that the growing emptiness that is trying to devour my soul? Are you calling to my heart, asking for entrance to tell me it will be alright? I've lost my God, but I have not lost my faith, because from here on, my compromise to my failed efforts is to do what is right. Looking back into that mirror, I see my reflection once more. But now, I am not that person. I am not a corpse, because from the depths of that mirror, a new man arises from the ashes of those that have suffered and died. This is how it is supposed to end. ...read more.