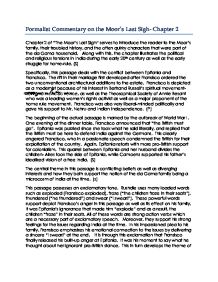 Formalist Commentary on the Moor's Last Sigh- Chapter 2 Chapter 2 of "The Moor's Last Sigh" serves to introduce the reader to the Moor's family, their troubled history, and the often quirky characters that were part of the da Gama household. Along with this, the chapter illustrates the political and religious tensions in India during the early 20th century as well as the early struggle for home-rule. (S) Specifically, this passage deals with the conflict between Epifania and Francisco. The rift in their marriage first developed after Fransisco ordered the two unconventional architectural additions to the estate. Francisco is depicted as a modernist because of his interest in Bertrand Russell's spiritual movement- Religion and Science, as well as the Theosophical Society of Annie Besant who was a leading women's rights activist as well as a major proponent of the home rule movement. Francisco was also very liberal-minded politically and gave his support to Mr. Nehru and Indian independence. (P) The beginning of the actual passage is marked by the outbreak of World War I. One evening at the dinner table, Francisco announced that "the British must go". Epifania was puzzled since she took what he said literally, and replied that the British must be here to defend India against the Germans. ...read more.

Francisco states that "Our youngsters are dying in British uniforms!", which of course is something that will reach the heart of all Indians. He is sending out an emotional plea for other Indians to join his side in promoting home-rule through the grave and depressing examples he provides in his speech: "Our nation's wealth is being shipped off...at home our people starve, but British Tommy is utilizing our wheat, rice, jute and coconut products... our mines are being emptied...I swear!". Fransisco finally concludes with: "Bombay-wallahs getting rich and nation going to pot" as a stark warning to his family and fellow countrymen that if the British are not removed, then India will soon be left in shambles. (s) Francisco also relies on the use of imagery in his speech. Specifically, he uses imagery of the India's great natural resources- the wheat, jute, coconut, saltpeter, manganese, mice and even its youth. One can imagine the beautiful landscapes in India where these materials are sourced, and at the same time see the British consuming and abusing these resources and the landscape so profligately. (P) In addition, character specific language is evident in this passage. So far the character of Francisco has been developed as one of a modernist and an intellectual, and these traits are evident in his use of witty language. ...read more.

Francisco represents the proponents of the home-rule movement such as Nehru, Gandhi and Annie Besant. Their quarrel symbolizes the conflict between the British and the reformers in India at the time. The conflict in the da Gama household led to dysfunction in the family, but India grew out of dysfunction and conflict. India grew out of a conflict of interests between the British rulers and the Indian people desperate for freedom. India was born after the reformers succeeded in removing the British during their years of passive, non-violent resistance. However, modern day India was also born out of another conflict- the Muslim-Hindu conflict. It was this dispute that led to the partition of India and the creation of the Muslim states of Pakistan and East Pakistan and the Hindu dominated state of India. Camoens and Francisco advocated for a secular India, home to both Hindus and Muslims, and free of religious disputes in government. However, the partition brought an end to their hopes. (S) In conclusion, this passage develops the theme of conflicting beliefs and interests as well as advances the portrayal of the family as a microcosm of India. The characters take clear side in the conflicts that fill Indian politics which in turn deepens the divide already in place in their family. (S) ?? ?? ?? ?? ...read more.