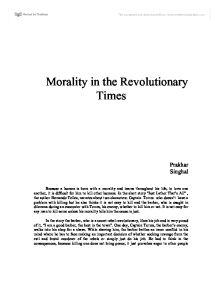 Morality in the Revolutionary Times Prakhar Singhal Because a human is born with a morality and learns throughout his life, to love one another, it is difficult for him to kill other humans. In the short story "Just Lather That's All" , the author Hernando Tellez, narrates about two characters: Captain Torres who doesn't have a problem with killing but he also thinks it is not easy to kill and the barber, who is caught in dilemma during an encounter with Torres, his enemy, whether to kill him or not. It is not easy for any man to kill some unless his morality tells him the cause is just. ...read more.

If he would kill the captain, he would a hero for the rebels but he would be called a coward and would not be spared by the captain's men, as he says, "It was going to be very difficult to explain that I had him right in my hands and let him go peacefully - alive and shaved." It is an innate human nature to think that revenge is sometime the best option to solve problems. The barber chooses to just give the captain a shave and thus to preserve his job and his reputation. He made a correct decision; maybe he condemned himself to an uncertain future, but he tried to be congruent and not just kill for revenge. ...read more.

For this reason he let the barber shave him knowing that he was a rebel and could kill him in a way that even he himself wouldn't know. In the end his belief came out to be true and he was spared by the barber and also felt ashamed of the dreadful crimes he had committed in the past. "Just Lather, That's All," describes that the human morality can prevent human slaughter even in the extreme situations. Revenge, the main cause, in not the way of solving any problem. It's the human's conscious of right or wrong which can lead him to make right decisions. Although there have been men in the past who have killed many, but they must have done so because of a cause that they feel it is just, as it is not easy for any man to kill someone. ...read more.