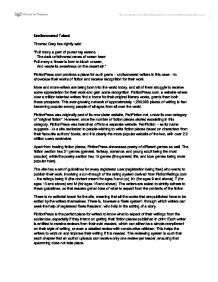 More and more writers are being born into the world today, and all of them struggle to receive some appreciation for their work and gain some recognition. FictionPress.com, a website where over a million talented writers find a home for their original lit

Undiscovered Talent Thomas Gray has rightly said: "Full many a gem of purest ray serene, The dark unfathomed caves of ocean bear: Full many a flower is born to blush unseen, And waste its sweetness on the desert air." FictionPress.com provides a place for such gems - undiscovered writers in this case - to showcase their works of fiction and receive recognition for their work. More and more writers are being born into the world today, and all of them struggle to receive some appreciation for their work and gain some recognition. FictionPress.com, a website where over a million talented writers find a home for their original literary works, grants them both these prospects. This ever-growing network of approximately 1,200,000 pieces of writing is fast becoming popular among people of all ages from all over the world. FictionPress was originally part of its now sister website, FanFiction.net, under its own category of "original fiction". However, once the number of fiction pieces started escalating in this category, FictionPress was branched off into a separate website. ...read more.

This helps the writers to work on and improve their writing if it is needed. The reviewing system is such that each chapter that an author uploads can receive only one review per reader, ensuring that spamming does not take place. Many authors on FictionPress add a personal touch to each chapter whenever they update, either giving a general update on their lives outside of the FictionPress world, or clearing up any doubts the readers might have over the previous chapters. Another quirk on this site is that there are many authors who like to include character pictures for their stories. This definitely helps their readers picture the stories better and derive some sort of satisfaction from having a clear image of the main and/or supporting characters. Adding character pictures can help the authors write their stories better as well. Once they are sure of what they want their characters to look like, they can better picture the characters and play out the scenes in their head while writing. ...read more.

Despite this one main disadvantage (of plagiarism), FictionPress continues being one of the most popular online publishing websites. There are many genuinely talented writers here, many of whom publish their works here just to receive feedback from people of all age groups. There are other writers, however, who become more confident about their work once they have received a significant ego boost from their faithful readers as well as the critics, and move on to the 'real' world, where they get their works published in print. These are the ones who go on to make a name in the world and fulfill their dreams. FictionPress is therefore a portal for many to move from a so-called 'ordinary' world to the world of fiction. It is where writers find a release for their pent up creativity and readers get to fulfill their satisfaction of reading a good story. It is also a site for those undiscovered writers all over the world who are looking for feedback on their work from unbiased readers as they tread tentative and unchartered territory. "Writing is an exploration. You start from nothing and learn as you go." - E. L. Doctorow. ...read more.