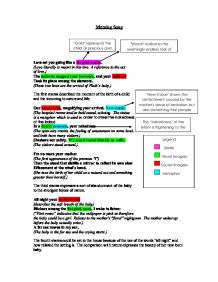 Morning Song Love set you going like a fat gold watch. (Love literally is meant in this line. A reference to the act of love.) The midwife slapped your footsoles, and your bald cry Took its place among the elements. (These two lines are the arrival of Plath's baby.) The first stanza described the moment of the birth of a child and the incoming to nature and life. Our voices echo, magnifying your arrival. New statue. (The hospital rooms tend to hold sound, echoing. The statue is a metaphor which is used in order to stress the nakedness of the baby) In a drafty museum, your nakedness (The open airy rooms, the feeling of amazement on some level, and both have many visitors.) ...read more.

A far sea moves in my ear. (The baby is the far sea and the crying starts.) The fourth stanza could be set in the house because of the use of the words "all night" and how relaxed the setting is. The comparison with nature expresses the beauty of her new born baby. One cry, and I stumble from bed, cow-heavy and floral (when the baby cries, she immediately leaves her bed. "cow-heavy" meaning that her breasts are full of milk.) In my Victorian nightgown. (The Victorian gown is a reference to the past to emphasize the role of women as being housewives and their main role was to care for the children. She alludes to her resentment of the connection between her nightgown and the baby.) Your mouth opens clean as a cat's. ...read more.

Your handful of notes; (At dawn, the baby's cries are clear and he/she is in the process of acquiring language.) The clear vowels rise like balloons. (The bonds become undeniable as the infant opposes her with his or her "clear vowels." The mother's contemplation of her child end on a positive note.) The final stanza is a continuation of the previous stanza because it describes the weeping of the baby. In "Morning Song," the mother's bond to her infant strengthens as she tries to deny it. While attempting to prove that she has no connection to this new life, during the poem it becomes clear that the connection is undeniable. The "morning song" is the baby. The Morning Song is a mother, waking to feed her baby. It reflects her feminism, through the importance of maternity and the joy that a son can give to her. ...read more.