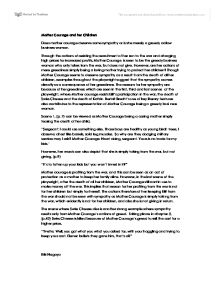 Mother Courage and her children commentary

Mother Courage and her Children Does mother courage deserve some sympathy or is she merely a greedy callow business woman. Through the actions of resisting the recruitment of her son to the war and charging high prices for increased profits, Mother Courage is seen to be the greedy business woman who only takes from the war, but does not give. However, are her actions of mere greediness simply being a loving mother trying to protect her children? Though Mother Courage seems to deserve sympathy as a result from the death of all her children, examples throughout the playwright suggest that the sympathy comes directly as a consequence of her greediness. The reasons for her sympathy are because of her greediness which are seen in the first, third and last scenes of the playwright, where Mother courage resists Eilif's participation in the war, the death of Swiss Cheese and the death of Kattrin. Bertolt Brecht's use of key literary features also contributes to the representation of Mother Courage being a greedy business woman. ...read more.

The scene where Swiss Cheese dies is another strong example where sympathy results only from Mother Courage's actions of greed. Taking place in chapter 3, (p.42) Swiss Cheese is killed because of Mother Courage's greed to sell the cart for a higher price, "Yvette: Well, you got what you what you asked for, with your haggling and trying to keep your cart. Eleven bullets they gave him, that's all." Some sympathy can be shown towards Mother Courage as her son has just died; however, her greediness is one of the sheer reasons for the death of her son. If Mother did not bargain the price for her cart, and barter for a higher a price, the life of Swiss Cheese could have been saved. It is evident that Mother Courage may be sympathised with because of her being represented to be a caring mother who has lost her son. When in reality she has simply brought upon the death of Swiss Cheese onto herself as if it was not for her greed in the negotiation between the selling of the cart, the sympathy resulting from the death would not have occurred. ...read more.

It can be seen that for each act of greediness she displays, a consequence is followed with. The greed to take from war but not give, she loses Elif, the greed to bargain the price of the cart results for the death of Swiss Cheese and for the greed of sheer money she loses Kattrin. This suggests that Bertolt Brecht wants to communicate that his intension was not to create a mood of sympathy for Mother Courage, but rather a punishment. Though one may seem unusual to have absence sympathy for someone who has lost their children, Bertolt Brecht is communicating the message that the greed of Mother Courage is the reason for the sympathy the audience is feeling. Though Mother Courage may seem like the good mother looking out for her children, analysis shows that this is not the case. She is merely the greedy business woman who is punished with the loss of her children for the reason of her greed and in return the audience feels some sympathy. However, the sympathy is only the result from her greed which has created the loss in the first place. ?? ?? ?? ?? Riki Nagoya ...read more.