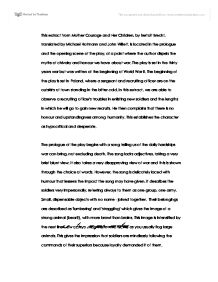 Mother Courage and Her Children

This extract from Mother Courage and Her Children, by Bertolt Brecht, translated by Michael Hofmann and John Willett, is located in the prologue and the opening scene of the play, at a point where the author dispels the myths of chivalry and honour we have about war. The play is set in the thirty years war but was written at the beginning of World War II. The beginning of the play is set in Poland, where a sergeant and recruiting officer are on the outskirts of town standing in the bitter cold. In this extract, we are able to observe a recruiting officer's troubles in enlisting new soldiers and the lengths in which he will go to gain new recruits. He then complains that there is no honour and upstandingness among humanity. This establishes the character as hypocritical and desperate. The prologue of the play begins with a song telling us of the daily hardships war can bring, not excluding death. ...read more.

It does not specify whether this is because of lack of food or because war is so desolate that they cannot hold their food down. The line Courage has rum with which to lace it talks of giving rum to soldiers so they will not feel anything and since courage is defined as the absence of fear, the soldiers are therefore courageous. The line marching to death is also used. This links with the soldiers being courageous because you have to be courageous to march, knowing that at the end awaits death. The speech by the Recruiting Officer consists of mainly one long rambling sentence. This implies that the brawl is spoken by an uneducated soldier. It also suggests that the military cannot find enough recruits to enlist that it has to put soldiers in positions that they have neither the ability nor motivation to do well. ...read more.

The line With crawling lice and looted cattle shows the poor state of hygiene and health the troops are in. This immediately dislodges the myth that war is all fame and glory. Instead, a vision of unhygienic environment that many soldiers live in during war is created. This extract, especially the prologue, spares no time in easing the reader into the reality of war. Instead, it plunges them into one of the worse aspects of war. The recruiting officer's speech reveals much about human behaviour which the reader can relate to and this entices them to read on. The extract provides a very good introduction to the book for the reader and effectively summarises the hardships of war. The purpose of this extract is to introduce the reader to various parts of war in a way that will neither alarm nor bore the reader. This is achieved by various literacy features such as imagery, diction and repetition and by the hypocritical speech made by the recruiting officer. ?? ?? ?? ?? ...read more.