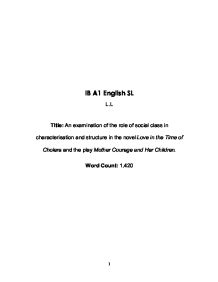 Mother Courage &amp; Love in the time of cholera

IB A1 English SL L.L Title: An examination of the role of social class in characterisation and structure in the novel Love in the Time of Cholera and the play Mother Courage and Her Children. Word Count: 1,420 In the novel Love in the Time of Cholera (1985) by Gabriel Garcia Marquez and the play Mother Courage and Her Children (1939) by Bertolt Brecht, the role of 'class' (that is, social, economic and educational status) is fundamental to characterization and structure. While both writers focus on people in the lower classes, they each employ social class to make different points. Brecht uses the character of Mother Courage to promote his anti-capitalist viewpoint by presenting her as the small-time war profiteer or petite bourgeoisie in Marxist terms as well as giving her the same talent for profiteering as those at the top. Marquez on the other hand uses the characters Fermina Daza and Florentino Ariza to uphold the argument that 'love conquers all' by presenting class as a barrier which the two must overcome. Whereas Brecht uses the dramatic techniques of Epic Theatre to express his ideology that war is essential to business, Marquez uses elements of Magical Realism to develop his love story against the backdrop of class division. The characters within the texts by Brecht and Marquez are shaped upon their experiences with social class. ...read more.

Fermina's interactions with people in the upper class as well as her father have also shaped her into being distant, self-sufficient and sometimes unsympathetic. Her father's expectation of Fermina especially plays a part in shaping her character; his idealized vision of her being a "great lady"7 and strictness pushes her to being seemingly a picture of perfection, however in the process leaving her to become lonely, "an old maid of twenty"8, her loneliness only making her more distant from people. Marquez and Brecht focus on social class in their texts in order to represent their two different viewpoints. Brecht uses his characters, in particular Mother Courage, to signify his anti-capitalist view by showing that the characters of lower classes cannot gain from war in any way. As the petite bourgeoisie, Mother Courage has a canteen-wagon small business in which she uses to try and profit from the war. Her business interests cannot coexist with her other concern, her children, thus leading to the lost of her all three children and so Brecht's play causes us to withhold our sympathy towards Mother Courage. As stated in the first scene, after Eilif the eldest and first child to be taken away from her, the Sergeant states that one who would "like the war to nourish you, have to feed it something too,"9 meaning that one who lives of war cannot avoid giving something back. ...read more.

Alternatively, Marquez uses elements of Magical Realism to develop his storyline. The main element which he utilizes is the time aspect. In Love in the Time of Cholera, time does not move forward in an orderly fashion as it normally does in most books of other genres. There are great jumps in time, disrupting the linearity that time is normally perceived as. Throughout the novel there are several flash-backs as well as flash-forwards. The effect this has is to emphasise the significance of themes by having them reoccur several times throughout the time span of the story. Marquez's use of Magical Realism causes his readers to feel surprised at the amount of time that has passed within the novel and take in the ideas that Marquez presents whereas Brecht uses the techniques of Epic Theatre to purposely make his play removed from real life in order for the audience to not get caught up in the play for but stand back and see its intellectual or political message. Marquez and Brecht focus on social class in order to not only provide a means in which to shape the characters but also as a way to represent the writers two different points of views - Brecht's anti-capitalist and Marquez's view on love. Each accomplishes this through the use of their personal techniques; Marquez use of Magical Realism puts forward his idea of love conquering all while Brecht presents his ideology of war through the 'little' people through the use of Epic Theatre and in the end the playwright and novelist produce two great works. ...read more.