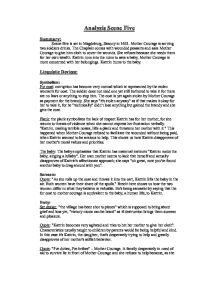 Analysis Scene Five Summary: Scene five is set in Magdeburg, Saxony in 1631. Mother Courage is serving two soldiers drinks. The Chaplain comes with wounded peasants and asks Mother Courage to give him cloth to cover the wounds. She refuses because she needs them for her own wealth. Kattrin runs into the ruins to save a baby, Mother Courage is more concerned with her belongings. Kattrin hums to the baby. Linguistic Devices: Symbolism: Fur coat: corruption has become very normal which is represented by the stolen woman's fur coat. The soldier does not need one yet still bothered to take it for there are no laws or anything to stop him. The coat is yet again stolen by Mother Courage as payment for the brandy. She says "it's stolen anyway" as if that makes it okay for her to take it, for he "technically" didn't lose anything but gained the brandy and she gets the coat. Plank: the plank symbolizes the lack of respect Kattrin has for her mother, for she resorts to threats of violence when she cannot express her frustration verbally. "Kattrin, making terrible noises, lifts a plank and threatens her mother with it." This happened when Mother Courage refused to facilitate the wounded without being paid, when Kattrin seemed to be anxious to help. This shows us how Kattrin disapproves of her mother's moral values and priorities. ...read more.

Clearly her wellbeing is her concern rather than her daughter's. Corruption: In this scene we see a lot of corruption. First of all, one of the soldiers being served by Mother Courage was wearing a stolen woman's fur coat. As soon as he saw that Mother Courage was distracted he attempted to steal brandy, and when caught, Mother Courage stole his fur coat as a payment for the drink. Second of all, the way the soldiers receive their payments is also through corruption. When Mother Courage exclaims that soldiers aren't even paid, the soldier who stole the fur coat says "It's not my fault, I was late for the looting. They only let us loot for an hour." This shows us that soldiers receive payment for their efforts by stealing from the townsfolk. He then continues saying "The general was going round saying, I'm not some inhuman monster. The town must have given him a bribe." The general commends himself by saying I'm not a bad guy that's why you only get an hour to rob these poor people. And above that, the soldier still doubts the general's "good intentions" and says that he must've taken a bribe, something he says so casually that it is clearly a norm. Yes it is. And not only with generals. Mother Courage herself freely states that she cannot help the peasant family who need her aid to survive because she needs the money for her own expenses, "Nothing doing. ...read more.

She goes against her mother's word to get help any way possible and actually risks her life to save one she doesn't even know. Affectionate: "Kattrin rocks the baby, singing a lullaby." "Kattrin lifts the baby in the air." In this scene Kattrin shows us that she differs from her mum, as she seems to have a lot of maternal instincts. She risks her life for a baby and manages to soothe it and play around with it and as Mother Courage says she is "happy as a lark, in all this misery." First Soldier (Fur Coat): Based on corruption: This soldier shows us nothing but bad traits. He is wearing a stolen woman's fur coat. He then tries to convince Mother Courage to give him a drink for free. When she refuses, he uses the commotion around him to sneak out the brandy "Fur Coat is rifling the drinks, and is now trying to make off with the bottle." Second Soldier: Helpful and Understanding: When the Chaplain explains the situation he's in, "the Second Soldier goes off with him" which shows us that this soldier is always ready to get up and offer his support in any situation, even when it's with or for people he doesn't know. He also understood Mother Courage's frustration in the middle of the hectic events and did not retort when she accused him of not doing anything about the victory music, something he was helpless about "Don't stand there. Tell them to stop that bloody music" ...read more.