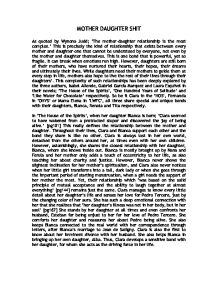 MOTHER DAUGHTER SHIT As quoted by Wynona Judd; 'The mother-daughter relationship is the most complex.' This is precisely the kind of relationship that exists between every mother and daughter-one that cannot be understood by everyone, not even by the mother and daughter themselves. This is one bond that is powerful, yet so fragile. It can break when emotions run high. However, daughters are still born of their mothers, who have nurtured their hearts, their hopes, their dreams and ultimately their lives. While daughters need their mothers to guide them at every step in life, mothers also hope to live the rest of their lives through their daughters'. This complexity of such relationships has been deeply explored by the three authors, Isabel Allende, Gabriel Garcia Marquez and Laura Esquivel in their novels; 'The House of the Spirits', 'One Hundred Years of Solitude' and 'Like Water for Chocolate' respectively. So be it Clara in the 'HOS', Fernanda in 'OHYS' or Mama Elena in 'LWFC', all three share special and unique bonds with their daughters, Blanca, Renata and Tita respectively. In 'The House of the Spirits', when her daughter Blanca is born; 'Clara seemed to have wakened from a protracted stupor and discovered the joy of being alive.' ...read more.

Fernanda acts deeply insensitive towards her daughter's feelings for her lover Mauricio Babilonia and handles the situation in a very irrational way, which leads to her daughter's love becoming a tragedy. She also acts in an extremely cruel manner, when she locks up Meme's illegitimate son, Aureliano in the workshop, keeping him away from the world. She decides her daughter's fate on her own and sends her to the convent where she was brought up, against her wishes, thus forcing her to live a life of miserable existence. This is perhaps the only similarity that connects the mother and the daughter, because by becoming a nun in her mother's birthplace, Meme indeed fulfills the grim destiny from which her mother had been rescued by Aureliano Segundo. While there may be many such instances of Fernanda's insensitivity towards her daughter's feelings, Fernanda's letters to her lying about the real situation at home, in order to conceal the truth about her troubled marriage with her husband also show a loving mother's attitude. She does not want to hurt her children and thus, even compromises to keep them blissfully unaware of the reality. ...read more.

However, in the end Tita utters those 'magic words that would make Mama Elena disappear forever', as she tells her spirit; '...I hate you, I've always hated you.' [pg199] Yet, while all these instances may prove that Mama Elena had always been a selfish, uncaring mother, the letters telling Tita about her mother's long lost love and passion, finally explain Mama Elena's unreasonable behavior towards her daughter. At this point, the reader learns of the major similarity between the lives of the mother and the daughter. Perhaps, they both loved each other immensely, but were never able to get that love across in the right way. Moreover, a little compromise from both sides would have made this relationship a beautiful one indeed. Hence, all three of these novels provide different examples of mother-daughter relationships. While some of these may be beautiful and everlasting bonds, others may not be as satisfying. Yet, in spite of all the differences mothers and daughters may have, estrangement between a mother and a daughter is certainly a combination of individual, familial, and societal factors. In all the three cases, there is a deep connection, though one which may not have been fully explored. Nevertheless, a mother-daughter relationship is one that celebrates womanhood and feminism and shall always continue to be special. ...read more.