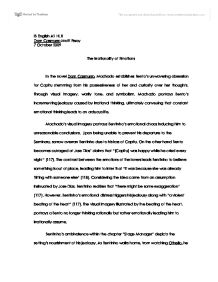 IB English A1 HL II Dom Casmurro Motif Essay 7 October 2009 The Irrationality of Emotions In the novel Dom Casmurro, Machado establishes Bento's unwavering obsession for Capitu stemming from his possessiveness of her and curiosity over her thoughts. Through visual imagery, warily tone, and symbolism, Machado portrays Bento's incrementing jealousy caused by irrational thinking, ultimately conveying that constant emotional thinking leads to an arduous life. Machado's visual imagery portrays Bentinho's emotional chaos inducing him to unreasonable conclusions. Upon being unable to prevent his departure to the Seminary, sorrow overran Bentinho due to his loss of Capitu. On the other hand Bento becomes outraged at Jose Dias' claims that "[Capitu] was happy while he cried every night" (117). The contrast between the emotions of the lovers leads Bentinho to believe something is out of place, leading him to infer that "it was because she was already flirting with someone else" (118). ...read more.

Through the afternoon metaphor Machado illustrates the victory of his dark side within himself. Consequently, Bentinho concludes that since the horseman lived in "the old Campo da Aclamacao, and then ... and then..." (136). The ellipsis used by Machado symbolizes Bentinho's reluctance to admit his jealous thoughts. However, considering that he later asks the reader to "reason with a burning heart" (136), like his, the metaphor once again illustrates the absence of rationality upon his thinking. Therefore, once Bentinho is taken over by jealousy he becomes unable to rationally ponder upon situations. Bento's paranoia allows for jealousy to alter his view of Capitu's arms from admiration to discomfort. At a ball Bento confesses his admiration for Capitu's arms, mentioning that they "were probably still in the marble they came from, or in the hands of the divine sculptor" (183). The allusion to God as the creator emphasizes her arms' magnificence. ...read more.

His terrified tone further characterizes insecurity over the relationship, which leads him to "[grow] even founder of Capitu" (187). Therefore, in order to eliminate Capitu's possible considerations for other men, Bentinho further commits himself in the relationship believing more love will eradicate his jealousy. Throughout the book Machado de Assis uses the motif of jealousy to move along the plot, since Bento's irrationality creates the drama in the novel. However, Macho has the deeper intention of warning readers of the problems caused by having decisions made entirely from emotions. Through the increase of jealousy within Bento, Machado illustrates the distress jealousy causes, even though Bento never proves his assertions. In the end the lack of validity of Bento's claims symbolize that a person will always find a problems if they seek one, however, they will not necessarily find its answers. Word Count: 818 ?? ?? ?? ?? 2 ...read more.