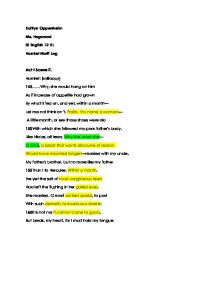 Motif of Misogyny in Shakespeare's Hamlet

Kaitlyn Oppenheim Ms. Hogwood IB English 12 HL Hamlet Motif Log Act I Scene ii. Hamlet: (soliloquy) 145......Why, she would hang on him As if increase of appetite had grown By what it fed on, and yet, within a month- Let me not think on 't. Frailty, thy name is woman!- A little month, or ere those shoes were old 150With which she followed my poor father's body, Like Niobe, all tears. Why she, even she- O God, a beast that wants discourse of reason Would have mourned longer!-married with my uncle, My father's brother, but no more like my father 155Than I to Hercules. Within a month, Ere yet the salt of most unrighteous tears Had left the flushing in her gall�d eyes, She married. O most wicked speed, to post With such dexterity to incestuous sheets! 160It is not nor it cannot come to good, But break, my heart, for I must hold my tongue. ...read more.

The words "...why she, even she-" (151) give the reader the impression that Hamlet not only expects this, but also accepts this of other woman, but never of his own mother. This creates an even more dramatized effect on the whole message of the soliloquy because Hamlet questions God as to why his own mother could do such a cruel and thoughtless act. Continuing, Hamlet shows his disapproval of this mother's actions by saying that "a beast that wants discourse of reason/ Would have mourned longer!" (152-153). The use of the word "discourse" shows that Hamlet believes that his mother lacks the capacity of orderly thought and procedure, and he describes her a subject worse than a beast, because even a beast would have waited and mourned over his or her dead husband longer than the one month. Hamlet uses words such as "unrighteous"(156), "galled"(157), and "wicked"(158) to describe features of his mother, which delivers a very negative and hating attitude towards her to the audience. ...read more.

At the beginning, his deep devotion to Ophelia is revealed in a love letter that he wrote to her: "O dear Ophelia, I am ill at these numbers; I have/ not art to reckon my groans; but that I love thee best, / O most best, believe it." (2:2:120-122) Unfortunately, circumstance, and Hamlet's newly formed suspicion against women, mean that this relationship is doomed. In truth it is Ophelia, the passive character in this relationship, that has become the hapless victim. She believed that Hamlet loved her, so much so that she feared he became "mad for [her] love." (2:2:84) She accepted his love letters and tokens. However, Hamlet becomes so concerned with how vindictive women are to men, (or more precisely, how much of a threat they are to him) that he cannot stop for a moment and realise the pain he is causing Ophelia. "Through Ophelia we witness Hamlet's evolution, or de-evolution into a man convinced that all women are whores; that the women who seem most pure are inside black with corruption and sexual desires." (Mabillard) ...read more.