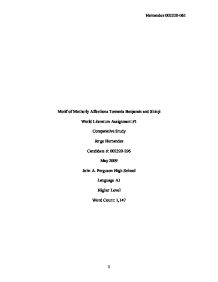 Motif of Motherly Affections Towards Benjamin and Shinji

Motif of Motherly Affections Towards Benjamin and Shinji World Literature Assignment #1 Comparative Study Jorge Hernandez Candidate #: 002320-296 May 2009 John A. Ferguson High School Language A1 Higher Level Word Count: 1,147 There comes a time in a person's life when the immense pressure or work becomes overwhelming to them, it is not surprising if they were to crack under the pressure. At this point, the parents of said person would intervene and try to re-build their child's broken foundation. When it comes to females, the father would help, and if the person were to be male, the mother would help. This is because males have a deeper bond with their mothers and females have a deeper bond with their fathers. In the novels Fiela's Child and The Sound of Waves, the motif of motherly affection towards Benjamin and Shinji contributes to the plot development. The motif of motherly affection towards Benjamin in Fiela's Child contributes to the plot development because of the hardships that Benjamin must face throughout his journey to find his true identity. In the novel, Benjamin is taken away from Fiela because he is a white boy and Fiela is black. ...read more.

With the backup of Fiela, Benjamin fought against the fact that he was Lukas, even when he found himself to be with the Van Rooyen family, the ones who had the missing son. In the novel The Sound of Waves, the motherly affection provided by Shinji's mother upon Shinji contributes to the plot development because she is the reason that the plot proceeded the way it did. At a point in the novel, Shinji's mother had gone up to Terukichi's home to allow Shinji and Hatsue to see each other. Not only is she defying Japanese tradition, she is basically demanding a much higher person to listen to her. "The stairs creaked softly as Hatsue...ever cross his damned threshold again!" (Mishima 128) shows the failed confrontation between Shinji's mother and Terukichi. This, of course, just made the passion between Shinji and Hatsue increase by a great amount, since now Hatsue cannot even talk to Shinji's mother. The secret meetings between Shinji and Hatsue became even more sacred. She is the foundation of Shinji's power, his will. His mother could have easily banished him from even glancing at Hatsue, but she did not; she told Shinji of what had happened, which made Shinji want to quit out of Hatsue. ...read more.

This, connected with their Japanese culture, is one of the reasons that Shinji made his decisions. The motherly affections towards Benjamin and Shinji shows how much someone can be affected by another person's action, especially a family member. The actions of Fiela towards Benjamin shows how she influenced the plot by giving Benjamin the strength to fight against those who want to place him into the Van Rooyen family, as Lukas Van Rooyen. The actions demonstrated by Shinji's mother shows how a mother can alter one's life so much. Seriously, she was able to allow Shinji and Hatsue to be together, while at the same time building his personality so he would be a respectful and dignified person. With these two mothers by their sides, Benjamin and Shinji were capable of realizing and fulfilling what they dreamed of, whether it was the dream of finding a job they wanted, being able to live with the wanted family, or being allowed to be wed with the girl of their dreams. The characters Fiela and Shinji's mother were created to show the influence a caring mother can have on their children's lives, and how they are willing to do virtually anything to keep their children safe and happy. ...read more.