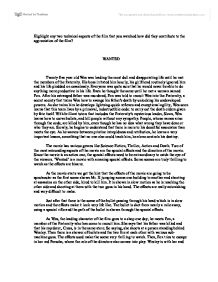 Highlight any two technical aspects of the film that you watched how did they contribute to the appreciation of the film? WANTED Twenty five year old Wes was leading the most dull and disappointing life until he met the members of the fraternity. His boss irritated him hourly, his girlfriend routinely ignored him and his life plodded on ceaselessly. Everyone was quite sure that he would never be able to do anything more productive in his life. Even he thought the same until he met a woman named Fox. After his estranged father was murdered, Fox was told to recruit Wes into the Fraternity, a secret society that trains Wes how to avenge his father's death by unlocking his undeveloped powers. As she trains him he develops lightning-quick reflexes and exceptional agility, Wes soon learns that this team lives by a primeval, indestructible code: to carry out the death orders given by fate itself. With brilliant tutors that includes the Fraternity's mysterious leader, Sloan, Wes learns how to curve bullets, and kill people without any sympathy. People, whose names arise through the code, are killed by him, even though he has no idea what wrong they have done or who they are. ...read more.

The Porsche then lands on a bus and they make a remarkable getaway. Fox brings Wesley to the headquarters of The Fraternity. The leader, Sloan invites Wesley to follow in his father's footsteps as an assassin. Wesley does not believe that he has supernatural powers and to show him what he is capable of, Gunsmith holds a gun to Wesley's head and asks him shoot the wings off some flies. Wesley has a panic attack and fires at the flies. The bullets are shown to strike off only the wings of the flies and the director's role in the movie is again shown. As the movie proceeds, Wes is shown hitting his friend with his keyboard and we can see his tooth flying out of his bloody mouth, along with several keys of the keyboard. He is then taken to the Fraternity's headquarters where he is taught how to use various guns and control his blood stream. Several scenes are breath taking such as Fox and Wesley jumping off a building onto a running train. The direction of the movie is brilliant as they are shown to be running on top of the moving train. ...read more.

The best scene of the movie is then shown, when Fox curves a bullet around the room, killing all the fraternity members including her, so saving Wesley. He searches for Sloan, who has escaped. Wesley who has become penniless once again, does not know what to do now. Now Wesley provides a voice over and a young man is seen sitting in front of a computer much like Gibson did at the beginning of the film. Sloan comes into the scene and points a gun at back of the his head. The man turns around and it is revealed that he is a decoy. He looks down at the carpet and Sloan finds himself standing over an X marked with post its. A bullet pierces through his head and the effects play their final role in the movie as the bullets path is shown entering from the same rifle that had killed Mr. X in the beginning of the movie, only this time, shot by Wesley. The direction is stunning and the effects make the movie wonderful and enthralling to watch. It is one of the best action movies I've ever watched and it's a must watch. -Rishikesh Dhoot -Words : 1514 ...read more.