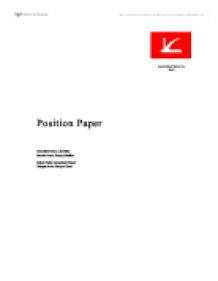 MUN Position Paper-Over the last two years, India and its constituent states, Jammu Kashmir included, has seen a spate of corruption scandals threatening to debilitate the political viability of the nation and the power of statesmen to enforce policies be

Position Paper Committee Name: Lok Sabha Member Name: Farooq Abdullah School: Podar International School Delegate Name: Shreyam Desai Committee: Lok Sabha Member: Farooq Abdullah School: Podar International School Delegate: Shreyam Desai Topic Area: The Recent Menagerie of Corruption Scandals involving Jammu Kasmir and the Nation Over the last two years, India and its constituent states, Jammu Kashmir included, has seen a spate of corruption scandals threatening to debilitate the political viability of the nation and the power of statesmen to enforce policies because of a reduction in their credibility. The 2G scandal rocked the nation, weakening the Jammu Kashmir economy and increasing the time-frame upon which telecommunication bills are passed, halting the steady progress being made because of increasing judicial review by the CAG. Bemusement about the scope of the Lokpal Bill of whether to include the honorable Prime Minister in its ambit too has threatened the belief of the people of Jammu Kashmir in it the state government. ...read more.

� Scarcity of Remuneration- Government officials do not get paid as much as their foreign counterparts. This encourages means to find alternate sources of income. Many of which are sourced through the parallel black economy. Policies There exist some governmental organisations established as a means to fight corruption. The Comptroller and Auditor General of India audits all receipts and expenditures and expenditures of the national and state governments, including those of authorities substantially financed by the government. Yet, the organisation is not a very efficient one. A Deputy secretary for example might more about the problems in his department than the CAG and his entire staff. The Indian Parliament has also failed to define the functions of the CAG as the constitution contemplated it would do. CAG, is also, to a certain extent, an inheritance from archaic colonial rule. This implies policies that are too outdated with the dynamism of modern India. The Security and Exchange Boards of India also regulates finance and may prevent pecuniary corruption, so essential due to its large scale, but ...read more.

Doing so would discourage corruption because the pressure of constant checks may deter statesmen to engage in such activities. � Transparency- More transactions, transfer of assets, selling of bonds, and other governmental activities should be made more transparent and available to the public for increasing scrutiny. � Media: Media sources can be used to proliferate the negative effects of corruption to different mediums such as print media, television news agencies, and radio stations pan-India. Advertisements with validation by a public personality with a large following such as an actor can also be used to discourage corruption by the general public such as the casual graft practiced by the citizenry at traffic signals. Conclusion The nature of corruption is universal. Many policies have been tried, some have succeeded, and most have failed. Yet, this should not discourage further actions in attempting to stop it. This nation was founded on the doctrines of liberty and democracy. Corruption halts this vision, instead promoting bondage and autocracy. It must be prevented. And it is essential, that this prevention starts immediately. Shreyam Desai 3 Shreyam Desai 1 ...read more.