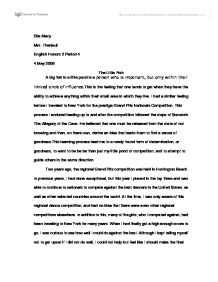 My experiences and Socrate's allegory of the cave.

Elle Macy Mrs. Theriault English Honors 2 Period 4 4 May 2009 The Little Fish A big fish in a little pond is a person who is important, but only within their limited circle of influence.This is the feeling that one tends to get when they have the ability to achieve anything within their small area in which they live. I had a similar feeling before I traveled to New York for the prestige Grand Prix Nationals Competition. This process I endured leading up to and after the competition followed the steps of Socrate's The Allegory of the Cave. He believed that one must be released from the state of not knowing and then, on there own, derive an idea that leads them to find a sense of goodness.This learning process lead me to ...read more.

When I had finally got a high enough score to go, I was curious to see how well I could do against the best. Although I kept telling myself not to get upset if I did not do well, I could not help but feel like I should make the final round because I had at all the local competitions. This feeling of confidence from past experiences blind sided me from the reality that there were others out there that were as good, and even better than me. It did not come from the ignorant idea that their could be people better than myself, but rather because I did not know otherwise. When I finally competed in New York and did not place, I was deeply hurt because I had not felt such a feeling of complete disappoint in my abilities before. ...read more.

When sharing my story with my peers, instead of listening to what I had to say, they just kept questioning me about the competition. At first, I was very upset that they did not take my realization seriously. Later on, I understood that they would continue not to understand until they too could experience it on their own. Through this competition, I went through the steps of Socrate's allegory and realized what I needed to do if I wanted to become someone in the dance world. Although I could not reach through to my friends, I will always hold onto this experience because it was life changing to me and my future dance career. The realization that failures can turn into successes through determination and hard work keeps me striving to become better. With this determination, slowly but surely, I will be able to be among those who swim in the bigger pond. ...read more.