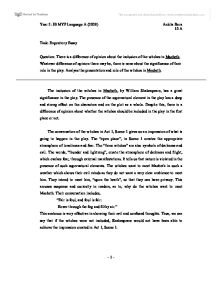 Task: Expository Essay Question: There is a difference of opinion about the inclusion of the witches in Macbeth. Whatever difference of opinion there may be, there is none about the significance of their role in the play. Analyse the presentation and role of the witches in Macbeth. The inclusion of the witches in Macbeth, by William Shakespeare, has a great significance in the play. The presence of the supernatural element in the play has a deep and strong effect on the characters and on the plot as a whole. Despite this, there is a difference of opinion about whether the witches should be included in the play in the first place or not. The conversation of the witches in Act 1, Scene 1 gives us an impression of what is going to happen in the play. The "open place", in Scene 1 creates the appropriate atmosphere of loneliness and fear. The "three witches" are also symbols of darkness and evil. The words, "thunder and lightning", create the atmosphere of darkness and fright, which evokes fear, through external manifestations. It tells us that nature is violated in the presence of such supernatural elements. ...read more.

But the readers even witness guilt in Macbeth, when he says, "Stars, hide your fires!" which tells us that he wants darkness, so that he can hide his, "black and deep desires." Hence, if the witches would not have been included, a major part of Macbeth would not have been covered, and that is the greed in Macbeth, which leads to his evil ambition and his downfall. Lady Macbeth's thoughts are also influenced by the witches' predictions as after having the knowledge of the prophecies, she cries to make herself strong and evil, to support her husband. We can symbolize Lady Macbeth as the fourth witch, as she is the one who influences Macbeth in doing the evil deed, after the three witches. We can see this as she says, "Was the hope drunk" and "Art thou afeard", when Macbeth hesitates in going ahead with the plan. As a result, Shakespeare's exclusion of the witches would have affected the plot in a bad way, as Lady Macbeth plays an important part in encouraging Macbeth in killing Duncan. In Act 2 Scene 1, we can see the insight of Banquo and his feelings towards the witches and their predictions. ...read more.

Macbeth is trapped in the witches' false security; therefore, we can see that, what Hecate said about security being mortals' enemy is coming true. We can see his false security, as he keeps on repeating the words of the apparitions in the entire Act V. For that reason, we can say that, the absence of the witches would not have let Macbeth think that he will always be safe. Therefore, we saw how the presence of the witches changed the good character of Macbeth, to an evil being, and how the plot of the drama took a turn all together. The witches play a very essential part in the plot of Macbeth. Their absence would have made the play lifeless, as there would have been no exhilarating suspense, to make the book a thrilling experience for the readers. Their absence would have given a different end to Macbeth, as Macbeth would not have been greedy to become the king, and Lady Macbeth would possibly not have tried to influence her husband to continue the sinful ambition. ?? ?? ?? ?? Year 5: IB MYP Language A (2008) Ankita Bora 10 A - 1 - ...read more.