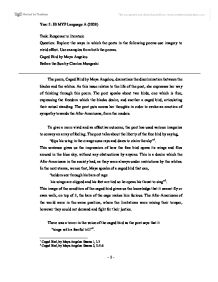 Task: Response to literature Question: Explore the ways in which the poets in the following poems use imagery to vivid effect. Use examples from both the poems. Caged Bird by Maya Angelou Before the Sun by Charles Mungoshi The poem, Caged Bird by Maya Angelou, dramatizes the discrimination between the blacks and the whites. As this issue relates to the life of the poet, she expresses her way of thinking through this poem. The poet speaks about two birds, one which is free, expressing the freedom which the blacks desire, and another a caged bird, articulating their actual standing. The poet puts across her thoughts in order to evoke an emotion of sympathy towards the Afro-Americans, from the readers. To give a more vivid and an effective outcome, the poet has used various imageries to convey an array of feeling. The poet talks about the liberty of the free bird by saying, "dips his wing in the orange suns rays and dares to claim the sky"1. This sentence gives us the impression of how the free bird opens its wings and flies around in the blue sky, without any obstructions by anyone. This is a desire which the Afro-Americans in the society had, as they were always under restrictions by the whites. ...read more.

The poem, Before the Sun by Charles Mungoshi, sensationalizes the emotions of a child who is in his childhood, but on the verge of becoming an adult. The boy is on the threshold of maturity. The poet speaks about a child, who is in his adolescence and who is very close to nature. Therefore, the poet uses vivid imageries of nature to convey the thoughts of the boy. The boy communes with nature and the universe. We read the poem through the boy's voice. In the first stanza itself, we get the hint that the boy is close to the nature. We can see that, the child is waiting for the sun to come up as he says, "Intense blue morning promising early heat"6, so that he can have a new start of the day. The figurative meaning of this would be that, he is waiting for his manhood to come. His childhood is the night, which is innocent of the activities going on in the world, and the sun for which he is waiting is his adulthood, which will bring a new day in his life. This day is revealing, which results in a loss of innocence of the night, i.e. the boy's childhood, as he will gain experience. ...read more.