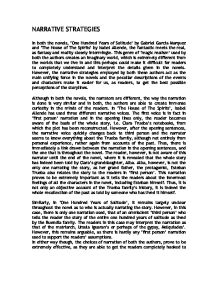 NARRATIVE STRATEGIES In both the novels, 'One Hundred Years of Solitude' by Gabriel Garcia Marquez and 'The House of The Spirits' by Isabel Allende, the fantastic meets the real, as fantasy and reality closely intermingle. This genre of 'magic realism' used by both the authors creates an imaginary world, which is extremely different from the worlds that we live in and this perhaps could make it difficult for readers to completely understand and interpret the details given in the novels. However, the narrative strategies employed by both these authors act as the main unifying force in the novels and the peculiar descriptions of the events and characters make it easier for us, as readers, to get the best possible perceptions of the storylines. Although in both the novels, the narrators are different, the way the narration is done is very similar and in both, the authors are able to create immense curiosity in the minds of the readers. In 'The House of The Spirits', Isabel Allende has used three different narrative voices. ...read more.

The readers in this case may interpret the narration as that of the matriarch, Ursula Iguaran's or perhaps of the gypsy, Melquiades'. However, this remains arguable, as there is hardly any 'first person' narration used to support the readers' assumptions. In either way though, the choices of narration of both the authors, prove to be extremely effective, as they are able to get the readers completely hooked to the plots. The reader has access to both objective and subjective views in the novels, which leads to a better understanding of the characters and events. A very important literary narrative technique used in both the novels is foreshadowing. Both the novels have very appropriate opening sentences, as these compel the reader to think what might happen in the next few pages and the curiosity builds up right from the beginning. Marquez's 'One Hundred Years of Solitude' opens with the lines; 'Many years later, as he faced the firing squad, Colonel Aureliano Buendia was to remember that distant afternoon when his father took him to discover ice.' ...read more.

Although in such genres, there is a very thin line between fantasy and reality, the reader tends to accept even the most alarming eccentricities possessed by the characters. The most extraordinary events are depicted in simple language, while the most mundane ones are explained extravagantly. The way the characters in the novel itself react to the supernatural occurrences also help the reader in suppressing his perception of reality momentarily and instead adopting the reality presented in the text. For instance, when in 'One Hundred Years of Solitude', Remedios the beauty flew away to heaven suddenly; 'Fernanda, burning with envy, finally accepted the miracle, and for a long time she kept on praying to God to send her back her sheets.' [pg.243] This also adds a touch of humour to the almost unbelievable happenings in the novels. This also allows the reader the open mindedness to look beyond the apparent reality. These two narratives also make great use of recurring motifs to further make the interpretation and understanding of the text easier. ...read more.