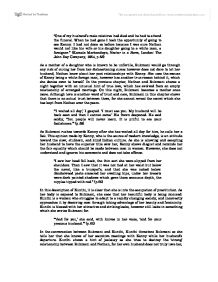 Nectar in a sieve

"One of my husband's male relatives had died and he had to attend the funeral. When he had gone I took the opportunity of going to see Kenny. I had not done so before because I was sure Nathan would not like his wife or his daughter going to a white man, a foreigner." (Kamala Markandaya, Nectar in a Sieve, London: The John Day Company, 1954, p.58) As a mother of a daughter who is known to be unfertile, Rukmani would go through any risk of curing her from her disheartening curse; however does not dare to let her husband, Nathan know about her past relationships with Kenny. She uses the excuse of Kenny being a white foreign man, however has another true reason behind it, which she denies even to herself. In the previous chapter, Nathan and Rukmani shares a night together with an unusual hint of true love, which has evolved from an empty relationship of arranged marriage. ...read more.

As her body is exposed to Rukmani, she sees that her beautiful body is being misused. Kunthi is a woman who struggles to adapt to a rapidly changing society, and incorrectly approaches it by deceiving men through taking advantage of her beauty and femininity. Kunthi is blessed with her attractive and striking looks, however still lacks in something which she envies Rukmani for. "'And for you,' she said, with knives in her voice, 'and for your precious husband.'" (p.60) In the conversation between Rukmani and Kunthi, Kunthi threatens Rukmani as she tells her that she knows of her secretive meetings with Kenny while her husband's departure. Kunthi shows a hint of jealousy as she tries to destroy the 'strong' relationship between Rukmani and Nathan, for her own husband does not truly love her, or care for her dirty choices she has made. Kunthi may be indirectly showing her desire of true love, for the closest thing she can get out of her associations with men is lust. ...read more.

Ira is nothing but an empty shell, where her youth and hopeful future has departed without warning. The transformation occurring to Ira emotionally is what would bring her to the same position as Kunthi without any option. Markandaya's Nectar is a Sieve is a tale of crucial and undeniable reality of the roles of women in India. Given no equality and the only way to survive, is to have the ability to give preferably male children, and to be used as objects of trade between families through marriage to gain some fortune. As Kenny mentioned to Rukmani, of him being sick of seeing their foolishness, it is mostly directed to the women in the Indian society, as they do not learn to do anything about their unequal treatment. They do not try to stand up for their rights and fight up for some standard, but just obey the rules and commands made by the men patiently. Possibly, Markandaya's hidden message to the readers through Kenny is to remind the irrational ways of the women for not looking for change and development on behalf of their rights. ...read more.