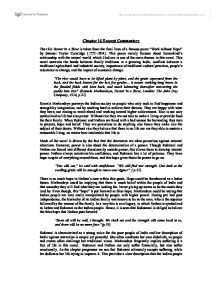 Nectar in a sieve

Chapter 16 Excerpt Commentary The title Nectar in a Sieve is taken from the final lines of a famous poem "Work without Hope" by Samuel Taylor Coleridge (1772-1834). This poem mainly focuses about humankind's relationship with the natural world, which I believe is one of the main themes in this novel. This novel unravels the bonds between family traditions in a growing India, conflicts between a traditional agricultural and industrial society, importance of traditional cultural practices, people's reluctance to change, and the impact of economic change. "The rice would have to be lifted plant by plant, and the grain separated from the husk, and the husk beaten for the last few grains... it meant working long hours in the flooded fields with bent back, and much labouring thereafter converting the paddy into rice" (Kamala Markandaya, Nectar in a Sieve, London: The John Day Company, 1954, p.97) Kamala Markandaya portrays the Indian society as people who only seek to find happiness and strength by imagination, not by working hard to achieve their dreams. They are happy with what they have; not aiming to reach ahead and working toward higher achievement. Rice is not only symbolized as life but also power. Without rice they are not able to make a living or provide food for their family. When Rukmani and Nathan are faced with a bad season for harvesting, they turn to prayers, hope and belief. ...read more.

Markandaya frequently implies suffering is a fact of life in this novel. Rukmani and Nathan not only suffer financially, but also suffer emotionally. As the chapter progresses we see that Rukmani ultimately accepts suffering, while Ira dedicates her life trying to improve it. This provides a clear description that the Indian people who devote themselves to the traditional Indian culture welcome suffering as it comes which is a contrast to the generations exposed to modernity, as they are determined to improve their standards of living. "Ira gave me a sidelong glance: "your imagination would not travel that far." "You do not know me," I said, troubled. "And I no longer understand you." "The truth is unpalatable," she replied." (p.102) I believe the power of the imagination is greater than the power of truth [Copyright Veena Pradeep Kumar]. The lower caste societies are driven to imagine for a better future and higher wealth. Since the "truth is unpalatable" for them to face, Markandaya implies that it is not possible for the Indian society to think to far ahead, because there is nothing being done to improve the economic conditions in Indian after Independence. Rukmani is kept not knowing the truth and so her imagination is allowed to run wild, ultimately leading her to darker things that might even be true. ...read more.

The protagonist describes Ira as a "Grown woman with a definite purpose and an invincible determination." This proves that the changing society did have aim and determination to rise above all, and achieve what seemed impossible to them. "Our last child, conceived in happiness at a time when the river of our lives ran gently, had been taken from us; I knew too well what he felt. Yet, although I grieved, it was not for my son: for in my heart I could not have wished it otherwise." (p.105) Throughout the novel water is portrayed as a symbol for life. Rukmani and Nathan named their first child Irawaddy, "after one of the great rivers of Asia, as of all things water was most precious to us." (p.20). Even though throughout the novel the main focus remain on harvesting rice, it is obvious that grain and seed are nothing without water. The rain patters also predict the good and bad times that Nathan and Rukmani undergo. Due to the effect of the drought, the family faces starvation, hence, Kuti dies. This could have been avoided if it had rained earlier. The struggle of individuals caught between tradition and modernity, or between India and the west, is a very common theme in Indian literature written after independence. This struggle is clear in Nectar in a Sieve, as Rukmani often finds herself battling between her traditional views and opinions, and the various modern events that seem to be taking over her life. ...read more.