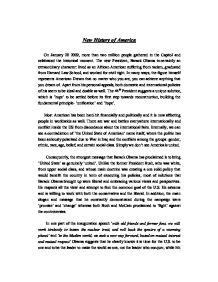 New History of America On January 20 2009, more than two million people gathered in the Capitol and celebrated the historical moment. The new President, Barack Obama is certainly an extraordinary character: lived as an African-American suffering from racism, graduated from Harvard Law School, and worked for civil right. In many ways, the figure himself represents American Dream that no matter who you are, you can achieve anything that you dream of. Apart from his personal appeals, both domestic and international policies of his seem to be ideal and doable as well. The 44th President suggests a unique solution, which is 'hope' to be settled before its first step towards reconstruction, building the fundamental principle- 'unification' and 'hope'. Most American has been hard-hit financially and politically and it is now affecting people in worldwide as well. There are war and battles everywhere internationally and conflict inside the US from discordance about the international fairs. Internally, we can see a contradiction of 'the United State of American' name itself, where the politic has been seriously polarized due to War in Iraq and the conflicts among the groups: gender, ethnic, race, age, belief, and certain social class. ...read more.

To summarize, unlike any other Presidents that we have seen it before, he is the leader who is willing to have a discussion and lead into a solution that fits two opposite parties: 'the time has come to reaffirm our enduring spirit'. Today, we often see news about American economy amidst financial crisis, and the surging stagflation. Collectively, the crisis does not only apply to a single class, but to all classes: ranging from labour to upper classes. Some critics say the situation is worse that the gloomiest period, Wall Street Clash in 1929. Even a year ago, due to the unreasonable doubled or tripled value of the stock share, it seemed that nothing is going to get on its way and the only thing they had to do was enjoying the opulence that has been granted. After all, however, it has been revealed that the growth was attained by the unhealthy way in terms of unethical management and the lack of capital allocation, and 'failure to make hard choices and prepare the nation for a new age'. Therefore without profoundly considering the economy regime of the President, the Nation is going walk through the debris. ...read more.

The instruments with which we meet them may be new. But those values upon which our success depends- hard work and honesty, courage and fair play, tolerance and curiosity, loyalty and patriotism', Mr. Obama kept assuring that we could overcome our burdens at the end. And he urges his people to reconstruct as their ancestors did: 'for us, they toiled in sweatshops and settle the West; endured the lash of the whip and plowed the hard earth. / Starting today, we must pick ourselves up, dust ourselves off, and begin again the work of remarking America'. Therefore, he is not confining the 'unique' solution to his the policies, but he encouraging and giving out hope. In conclusion, Barack Obama is a President that we never had seen it before the one who will harness the country in a right way. He is be ability to understand both side and stand for the weak, and endeavours to seek a mutual agreement are the things that. His issues are not just base on prejudice but humane issue. Most significantly, him itself is a ideal model which represent American Dream and creates a atmosphere of hope, and by him and this event, America has been being unified as one and found its path out from the mist. ...read more.