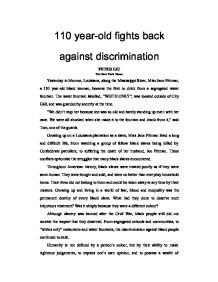 110 year-old fights back against discrimination PETER LIU The New York Times Yesterday in Monroe, Louisiana, along the Mississippi River, Miss Jane Pittman, a 110 year-old black woman, became the first to drink from a segregated water fountain. The water fountain labelled, "WHITE ONLY", was located outside of City Hall, and was guarded by security at the time. "We didn't stop her because she was so old and barely standing up even with her cane. ...read more.

Throughout American history, black slaves were treated poorly as if they were semi-human. They were bought and sold, and were no better than everyday household items. Their lives did not belong to them and could be taken away at any time by their masters. Growing up and living in a world of fear, blood and inequality was the permanent destiny of every black slave. What had they done to deserve such iniquitous treatment? ...read more.

Miss Jane Pittman, as an individual, demonstrates all of these human characteristics, and beyond. She is determined to change the views of society about her race, and is eager to prove that black people are no different. Miss Jane Pittman's action of drinking from a white only fountain will definitely have a major influence on the society. Her courage, determination, and faith will be the keys for Negroes to gain the respect and rights that they deserve in the near future. ...read more.