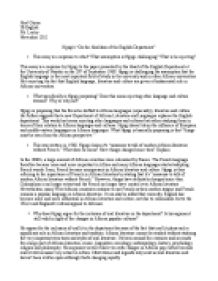 Ngugi's On the Abolition of the English Department

﻿Abel Girma IB English Mr. Lucky November 2012 Ngugi's ?On the Abolition of the English Department? 1. This essay is a response to what? What assumption is Ngugi challenging? What is he rejecting? This essay is a response by Ngugi to the paper presented by the Head of the English Department at the University of Nairobi on the 20th of September 1968. Ngugi is challenging the assumption that the English language is the most important field of study in the university and in other African universities. He's rejecting the fact that English language, literature and culture are given a fundamental role in African universities. 1. What specifically is Ngugi proposing? Does this mean rejecting other language and culture streams? ...read more.

Why or why not? An interesting quote from his conclusion is that ?education is a means of knowledge about ourselves.? I agree with this statement because it makes sense that one finds out more about his or her roots and personality through learning more As for the ?literary excellence?, Ngugi raises an excellent point about perspective. Literature isn't ?excellent? simply because it's written in a certain way but the audience also matters because the audience is the ultimate judge. One cannot simply ?fight against Bad English? or bad literature as Orwell suggests because perspective matters. Ngugi also believes that African literature must be seen from an African perspective, which makes sense to a certain extent but approaching any work of literature from a very limited perspective isn't good. In today's world, things must be seen from international perspective not only from an African perspective. ...read more.