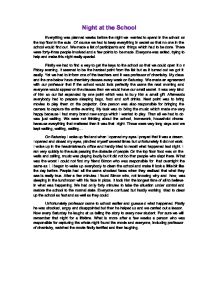 Night at the School. Everything was planned weeks before the night we wanted to spend in the school on the top floor in the aula.

Night at the School Everything was planned weeks before the night we wanted to spend in the school on the top floor in the aula. Of course we had to keep everything in secret so that no one in the school would find out. We made a list of participants and things which had to be done. There were forty-three people involved and a few points to be made. Everyone was exited, trying to help and make this night really special. Firstly we had to find a way to get the keys to the school so that we could open it on Friday evening. ...read more.

One person was also responsible for bringing the camera to capture the entire evening. My task was to bring the music which made me very happy because I had many brand new songs which I wanted to play. Than all we had to do was just waiting. We were not thinking about the school, homework, household chores because everything that mattered then it was that night. Those were very long days and we kept waiting, waiting, waiting... On Saturday I woke up first and when I opened my eyes I prayed that it was a dream. I opened and closed my eyes, pinched myself several times but unfortunately it did not work. ...read more.

It took him the longest time of all to believe in what was happening. We had only forty minutes to take the situation under control and restore the school to the normal state. Everyone confused but hardly working tried to clean up the school as fast and as well as they could. Unfortunately professor came to school earlier and guessed what happened. Firstly he was shocked, angry and disappointed but then he helped us and we carried out a lesson. Now every Saturday he laughs at us telling the story to every new student. For sure we will remember that night for a lifetime. What is more after a few weeks a person who was responsible for capturing the whole night found the movie and everyone, including professor of chemistry, watched the movie firstly terrified and then laughing. ...read more.