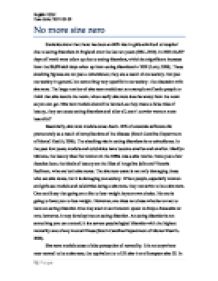 No More Size Zero. Essentially, size zero models cause death. 20% of anorexia sufferers die prematurely as a result of complications of the disease (South Carolina Department of Mental Health, 2006).

No more size zero Statistics show that there has been an 80% rise in girls admitted to hospital due to eating disorders in England over the last ten years (BBC, 2010). In 2007, 84,377 days off work were taken up due to eating disorders, which is a significant increase from the 58,878 sick days taken up from eating disorders in 2002 (Levy, 2008). These shocking figures are not just a coincidence; they are a result of our society. Not just our society in general, but something very specific in our society- the obsession with size zero. The large number of size zero models set an example and leads people to think that size zero is the norm, when really size zero is as far away from the norm as you can get. Size zero models should be banned, as they create a false idea of beauty, they can cause eating disorders and after all, aren't curvier women more beautiful? ...read more.

In reality, the normal size for a woman is a UK size 16, 5 full sizes larger than a size zero. Hence, a false perception of normal size is created. This leads to people perceiving themselves as "fat", when in actual fact they are just average. Claire Roberts, an experienced counsellor says that "they (models) create a false image of normality and perpetuate the myth that we should all be anorexic; otherwise, we are not within the normal range." This could not be truer. Most people in good health will not be able to reach a size zero without going to extremes, such as starving themselves. Self-esteem issues are a major problem amongst young people these days, especially girls. I know from personal experience that I never feel beautiful, and I know I am not alone. If models were a little larger, there would be fewer self-esteem issues. Amongst my friends, the average size is about a UK size 8, which is very small, but still far from a size zero. ...read more.

And doesn't a curvier woman show off clothes better? Clothes look very different on people depending on what size and shape they are, and since very few people actually are size zeros; wouldn't it be better to have models that are size ten or twelve? I know that many people agree with me. Yes, I am fully aware that there are plus size models, but plus size models start from a UK size 16. Although a size 16 is the average size in the UK, many young girls are around a size ten or twelve. There needs to be something in between, models that are curvy and can set an example for young girls, yet are still not as large as the plus size models. After all don't "real mean like curves and dogs like bones"? To conclude, there are many reasons why size zero models should be banned. They are the cause of deadly eating disorders; create a completely false image of normality and curvier models look better. I think that most people know what it feels like to feel fat and ugly. ...read more.