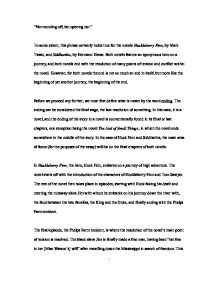 Not Rounding Off, But Opening Out: Huckleberry Finn &amp; Siddhartha

"Not rounding off, but opening out." To some extent, this phrase certainly holds true for the novels Huckleberry Finn, by Mark Twain, and Siddhartha, by Hermann Hesse. Both novels feature an eponymous hero on a journey, and both novels end with the resolution of many points of tension and conflict within the novel. However, for both novels the end is not so much an end in itself, but more like the beginning of yet another journey, the beginning of the end. Before we proceed any further, we must first define what is meant by the word ending. The ending can be considered the final stage, the last resolution of something. In this case, it is a novel, and the ending of the story in a novel is conventionally found in its final or last chapters, one exception being the novel The God of Small Things, in which the novel ends somewhere in the middle of the story. In the case of Huck Finn and Siddhartha, the main area of focus (for the purposes of the essay) will be on the final chapters of both novels. ...read more.

Also, the similarities between the start and the end help to highlight differences in Huck's personality and show that Huck has matured along his journey. At the beginning of the novel, when he listens to Tom lay out his plans, Huck willingly follows them with little or no questioning. However, by the end of the novel where Tom similarly lays out his schemes, Huck this time questions Tom's strategies and follows a proper chain of logic and reasoning. This is evidence of Huck's maturity that he has gained along his journey with Jim. The similarities between the start and end of the novel may signify that events have come full circle but they also signify the restarting of events. The novel takes on a cyclic nature at the end of the novel, reintroducing characters like Tom Sawyer and re-capturing the mood of the first few chapters. This may signal a restart of the sequence of events all over again, with the presence of Tom Sawyer and the frivolous mood of the novel acting as a sort of marker. The final lines "Aunt Sally she's going to adopt me and sivilize me and I can't stand it. ...read more.

The novel ends here, and we are left unaware of what becomes of Siddhartha, and more importantly, Govinda; we will never know if he attains enlightenment like Siddhartha has. The inconclusiveness of the novel's conclusion manages to embody the statement; the novel certainly rounds off (we discover that Siddhartha has indeed attained enlightenment), but at the same time, the novel opens up new possibilities, this time for the character of Govinda. In relation to the rest of the novel, the end is merely a new beginning; in Siddhartha, the end of Siddhartha's journey serves as the beginning of Govinda's. In both novels, we can see that the statement "Not rounding off, but opening out" holds true to certain extent, a certain extent because the novels DO round off, but they also open out. The pattern of the story structure in Huck Finn, where the end is similar to the beginning, and the indefiniteness of the ending of Siddhartha, opens up new paths for the characters. The endings of the two novels have opened up new roads, new destinations, new journeys, new adventures, new quests, new trials. And endless possibilities. ?? ?? ?? ?? 1 ...read more.