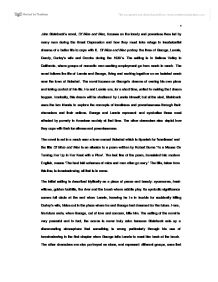 Of Mice and Men Analytical Essay

John Steinbeck's novel, Of Mice and Men, focuses on the lonely and powerless lives led by many men during the Great Depression and how they must take refuge in insubstantial dreams of a better life to cope with it. Of Mice and Men portray the lives of George, Lennie, Candy, Curley's wife and Crooks during the 1930's. The setting is in Salinas Valley in California, where groups of nomadic men seeking employment go from ranch to ranch. The novel follows the life of Lennie and George, living and working together on an isolated ranch near the town of Soledad. The novel focuses on George's dreams of owning his own place and taking control of his life. He and Lennie are, for a short time, united in making that dream happen. Ironically, this dream will be shattered by Lennie himself; but at the start, Steinbeck uses the two friends to explore the concepts of loneliness and powerlessness through their characters and their actions. George and Lennie represent and symbolise those most affected by poverty in American society at that time. The other characters also depict how they cope with their loneliness and powerlessness. The novel is set in a ranch near a town named Soledad which is Spanish for 'loneliness' and the title Of Mice and Men is an allusion to a poem written by Robert Burns 'To a Mouse On Turning Her Up in Her Nest with a Plow'. ...read more.

To counter this, he takes comfort in petting 'nice things with my fingers, sof' things.' (Steinbeck 101) His great strength and love of petting soft things - and accidently killing them - makes him a dangerous man. His first known victim is a mouse; his final victim leads to terrible consequences. (Steinbeck 103). Lennie's small dream of owning and tending the rabbits is encompassed in Geroge's larger dream. Whenever George recites the dream, Lennie associates it with rabbits. Lennie repeatedly asks George when they will 'live on the fatta the lan' - an' rabbits?' (Steinbeck 63). This dream relies on Lennie having control over himself, a thing which he does not yet have, and the dream remains unfulfilled. George and Lennie encounter another lonely character on arriving at the ranch in Soledad. Candy is an old man who lost his right hand in an accident. He owns a dog who is his constant companion. His relationship with his dog parallels Lennie and George's relationship. He represents the aged and the handicapped and because of this, Candy is often discriminated against for his inability to work productively. This is also a reason why Candy is suffering from loneliness. Before George and Lennie came, the only respite Candy had from his loneliness was from his dog who was his long time loyal companion. ...read more.

Symbolically, he describes Lennie in terms of two animals, a bear and a dog. Though the bear connotations ferocity, it is also cuddly as are dogs, particularly the puppies with whom Lennie plays. Steinbeck's style magnifies the images: Lennie has the innocence of a pet but the strength of those animals to kill. Other devices Steinbeck uses are similes, metaphors personification and onomatopoeia. Many things are not told by Steinbeck but are learnt from the dialogue of the characters. One distinguishing feature is that the author rarely specifies the colour of objects, making it seem as if they are living in a colourless world where life is monotonous. Lennie, George, Candy, Crooks and Curley's wife constantly turn to insubstantial dreams of a better life to counter the feelings of loneliness and powerlessness. Each character is portrayed as lonely despite the fact that some have a physical companion. However, as we have seen, the companion may be a liability, and may render them powerless in the way they control (Lennie and George, Curley's wife and Curley) and thus diminish their control over their future. However, when Lennie kills Curley's wife, the dreams of all remain unfulfilled, and their lives remain lonely and, in the case of George, filled with guilt. Steinbeck's novel, set near the town of Soledad, shows how many lived during the Great Depression, and makes a powerful comment on the unattainability of the American Dream. ...read more.