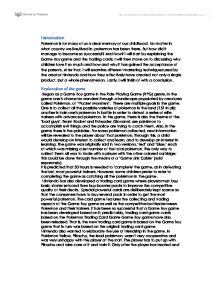 Introduction Pokemon is for many of us a dear memory of our childhood. No matter in what country we live/lived in, pokemon has been there. But how did it manage to become so successful? And how? I will start by explaining the Game Boy game and the trading cards. I will then move on to discussing why children love it so much and how and why it has gained the acceptance of the parents. After that, I will examine different marketing techniques used by the creator Nintendo and how they effectively have created not only a single product, but a whole phenomenon. Lastly, I will finish of with a conclusion. Explanation of the game Began as a Game Boy game in the Role-Playing Game (RPG) genre. In the game one's character wanders through a landscape populated by creatures called Pok�mon, of "Pocket Monsters". There are multiple goals in the game. One is to collect all the possible varieties of pokemon in the land (151 in all); another is train one's pokemon in battle in order to defeat a series of elite trainers with advanced pokemon. In the game, there is also the theme of the "bad guys". Team Rocket and its leader, Giovanni, use pok�mon to accomplish evil things, and the police are trying to catch them. Also, in the game there is the pok�dex. For every pok�mon collected, new information will be revealed to the player about that pok�mon. Through this, a child would develop an interest to collect and learn, and to develop an interest in learning. ...read more.

For example, a pok�mon such as Growlithe looks like a puppy. Pokemon was constructed to touch several timeless emotional needs. Part of its power comes from the story line of good vanquishing evil, where the child becomes part of the story and is empowered to capture his own monsters, train them and have them fight for him. It also stimulates the desire to collect them all, but it's competitive in a way that helps inspire social interaction. Parents become indirect targets, influenced by their children to buy Pokemon related products. The conventional wisdom about the current generation of parents is that they are more easily swayed than parents in the past to buy their children whatever they ask for. The fact that the game is relatively nonviolent (characters don't die, they faint) increases the likelihood that parents will allow it in their homes. Children have always liked to collect things. These things can be anything, from stamps to stickers to money. In the game, an objective is to catch and train every pok�mon there is in the pok�mon world. This being collecting has children hooked over it trying to collect all the pok�mon before their friends do so. The collection in the game directly mirrors the collecting done by the child consumers in response to the game. Children can imitate Ash and try to capture Pokemon, as well, either in the video game or by buying their plastic figures or trading cards. ...read more.

The game and the TV show do however build upon each other--the basic elements of the game provided a structure for the show's narrative, while the show provided a richer context for the experience of the game and provided clues and advice throughout about success in the game. It is not just a singular product that is being marketed; it is the whole "phenomenon". Conclusion In conclusion, the reason why pokemon is so popular is because the whole concept creates connections and bonds to the children since they can, through the main character Ash, go out on a adventure and live their dreams. The pocket-size game machine Game Boy is a magic wand that instantly turns kids into Pokemon trainers. A typical Pokemon aficionado wakes up to the early-morning TV show, eats breakfast staring at Pikachu at the back of a serial box, and trade Pokemon cards at lunch time. In after-school hours, too, kids are enthralled by more Pokemon in the form of video games and Pokemon Web sites. Nintendo has thus successfully not only created a product, but a whole lifestyle and phenomenon. Pokemon also has its own story line (as did Power Rangers and Ninja Turtles), but it also taps into the notion of collecting that sustained the Beanie Babies craze. While Power Rangers had the story line without the collecting and Beanie Babies had the collecting without the story line, Pokemon has both. It is also non-violent and therefore it gains the acception from the parents. In the game the characters faint, not die. One can wonder if the same is to be said about the pokemon fad. ...read more.