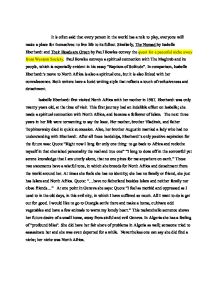 It is often said that every person in the world has a role to play, everyone will make a place for themselves: to live life to its fullest. Similarly, The Nomad by Isabelle Eberhardt and Their Heads are Green by Paul Bowles convey the quest for a peaceful niche away from Western Society. Paul Bowles conveys a spiritual connection with The Maghreb and its people, which is especially evident in his essay "Baptism of Solitude". In comparison, Isabelle Eberhardt's move to North Africa is also a spiritual one, but it is also linked with her convalescence. Both writers have a lucid writing style that reflects a touch of reclusiveness and detachment. Isabelle Eberhardt first visited North Africa with her mother in 1987. Eberhardt was only twenty years old, at the time of visit. This first journey had an indelible effect on Isabelle; she made a spiritual connection with North Africa, and became a follower of Islam. ...read more.

Quote: "...have no fatherland besides Islam and neither family nor close friends..." At one point in Geneva she says: Quote "I feel as morbid and oppressed as I used to in the old days, in this evil city, in which I have suffered so much. All I want to do is get out for good. I would like to go to Ouargla settle there and make a home, cultivate odd vegetables and have a few animals to warm my lonely heart." This melancholic sentence shows her future desire of a small home, away from sinful and evil Geneva. In Algeria she has a feeling of "profound bliss". She did have her fair share of problems in Algeria as well; someone tried to assassinate her and she was even deported for a while. Nevertheless one can say she did find a niche; her niche was North Africa. ...read more.

He calls this dose delivered by the Sahara "The Baptism of Solitude" and tries to explain to us what exactly one feels while experiencing this change. In the foreword of Their heads are Green he explains his attraction towards North Africa is its diversity and the people's unique manner of living. He feels that the tribes of North Africa should continue to follow their current way of life, away from "the various gadget-forms of our garbage" referring to western influences. Both Paul Bowles and Isabelle Eberhardt found their niche in North Africa. Eberhardt's move to North Africa is mainly based on religious considerations but it was also spurred by her aversion towards Geneva and Europe after the series of unfortunate events that struck her. Paul Bowles, on the other hand, enjoyed the diverse culture and solitude of North Africa. Eberhardt and Bowles found their place in North Africa; steeped themselves in Maghrebian ways; and created a special bond with the people. ...read more.