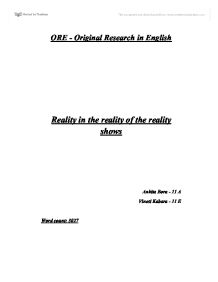 ORE - Original Research in English Reality in the reality of the reality shows Ankita Bora - 11 A Vinoti Kabara - 11 E Word count: 3027 Introduction Reality television is a genre of television programming which presents ostensibly unscripted dramatic or humorous situations, documents actual events, and mostly features ordinary people instead of skilled actors. These shows give a break to the wonders dwelling in the interiors of the country to showcase their talent. There are a number of sub-categories of reality television, which try to present different kinds of talent to the public. A few of them are: 1) One of the most famous being, 'reality competition', or 'reality game shows', in which participants compete doing various tasks to win a prize. The participants often live together in a confined environment. At the end of the game show, one person is declared the winner, which is done by either disapproval voting or by voting for the most popular choice to win. Shows of this genre are, 'American Idol', 'Big Brother', 'MTV Roadies', etc. 2) Secondly, there are fear centric shows which place the participants in frightening situations or locations. The aim is to generate emotions of fright, panic and disgust. Some of the shows which are fear centric are, 'Fear Factor', etc. 3) Next we have reality television featuring hidden cameras rolling when random passers-by encounter a staged situation. The aim of the show is to amuse the viewers by the reactions of the contestants. Examples of such reality shows are, 'Room 401', etc. 4) We even have talk shows as a form of reality television, where a host interviews a featured guest, and discusses topics which creates on screen drama or tension. Shows of this category are, 'The jerry Springer Show' etc. 5) There are hoax reality shows, where a prank is being played on the cast members. The goal of hoaxes is to entertain the viewers. These shows being entertaining, at the same time they are also very addicting. ...read more.

We may really hate the characters and the way they act or because all of the drama they bring to the show, but these are the characters that make the show worth watching just to see what they will do next, or sometimes they remind us of people we know, so we connect with the show." These experiences of her can be justified for the issue effects of reality shows on the viewers. Now concluding our literature review we would like to say that different people have different views and opinions about various issues. These views can be both positive and negative. Considering Larry's and Aschreurs' blogs and Kashmira Lad's and Marc Steel's articles, we have got an outlook about what and how other people think about our Original Research in English essay topic. As one of them is based on a person's own experience it makes it even easier to accomplish our task of how can people be affected by watching reality television. Investigation Our topic "The reality in the reality of the reality shows" is very vast and needs many areas to be investigated in order to find the right answer. According to its needs we thought of ways in which we could research on our topic and get its details and to do so we decided on many different tools and instruments. Here the tools and instruments would mean the internet, newspapers, magazines and surveys. Internet Internet is a source; it's a network that provides every kind of information and keeps us connected with the world. Keeping this in mind we thought of making internet our main source of information. We decided that we would look at different articles, check other people's blogs, go through websites relating to our topic and read all the possible articles which would talk about reality shows and see what are other's view points on how fake or real these shows are. ...read more.

Therefore after going through all the positive and negative points we would conclude by saying that reality shows are good and entertaining however one should know his/her limits and should understand the importance of other things which are a part of your routine. If this would be kept in mind then reality shows would be the perfect pleasurable shows. Here is the result of our survey: The graph below is made on the base of time spend by students on reality shows. Conclusion In order to conclude our essay we would like to say that, we were successful in investigating and analysing our task, which holds the issue of the reality of the reality in the reality shows, i.e. the effects of such programmes on the viewers. In this section of our essay, we would like to evaluate our performance. Our first task was literature review, where we got hold of good articles and blog posts on the internet, which helped us having a broader outlook on our topic. Next we had to investigate about our topic, which we did by doing a number of surveys and searching many articles on the internet, and hence analysing them. We could have improved this by expanding our survey amongst other grade students, to get a broader outlook, and by searching more articles from newspapers and magazines which would have added to our research tools. Then we had to an analysis on our research topic, which was made easier because of the investigation we had done. After the evaluation, we would also like to give our opinion as to what should people do to get out of the addiction of such shows. The main disadvantage of watching such shows being the mass wastage of time, people should limit themselves to watch only one reality show a week, rather than watching three to four reality shows a week. This would help them manage their time in a great deal. Therefore, we would now like to conclude our essay by expressing this much of our views and opinions about the reality of the reality in the reality shows. ...read more.