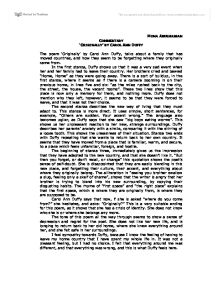 MONA ABULHASSAN COMMENTARY 'ORIGINALLY' BY CAROL ANN DUFFY The poem 'Originally' by Carol Ann Duffy, talks about a family that has moved countries, and how they seem to be forgetting where they originally came from. In the first stanza, Duffy shows us that it was a very sad event when her and her family had to leave their country. Her brothers cried and bawled "Home, Home" as they were going away. There is a sort of buildup, in the first stanza, where it seems as if there is a camera zooming in on their previous home, in lines five and six: "as the miles rushed back to the city, the street, the house, the vacant rooms". These two lines show that this place is now only a memory for them, and nothing more. ...read more.

This shows us her unpleasant reaction to her new, strange surroundings. Duffy describes her parents' anxiety with a simile, comparing it with the stirring of a loose tooth. This shows the uneasiness of their situation. Stanza two ends with Duffy repeating that she wants to return back to her own country. It seems that they have moved from a place that is familiar, warm, and secure, to a place which feels unfamiliar, foreign, and hostile. The beginning of stanza three, immediately gives us the impression that they have adapted to the new country, and that she doesn't like it. "But then you forget, or don't recall, or change" this quotation shows the poet's sense of self-doubt. ...read more.

she hesitates, and asks: "Originally?" This is a very suitable ending for this poem, as it shows that she has a crisis of identity. She does not know who she is or where she belongs any more. The tone of this poem all the way through seems to show a sense of depression and regret for the poet. She does not like her new life, and is longing to return back to her old home, where she knew everything around her, and she felt safe in her surroundings. I feel sympathy towards Duffy, because I know the feeling of having to leave my home country that I have spent my whole life in. It was not a pleasant feeling, but I had no choice. I felt that everything around me was different, and that everything was wrong, and this is what Duffy feels here. ...read more.