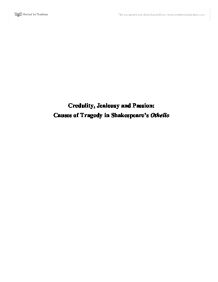 Credulity, Jealousy and Passion: Causes of Tragedy in Shakespeare's Othello In the tragic play, Othello, by William Shakespeare, the protagonist Othello transforms from a powerful noble gentleman to a savage murderer. There are many factors that cause this tragedy. This includes credulity, jealousy and passion. Credulity makes Othello believe Iago's lies and becomes jealous, passion makes Othello kill his innocent wife, Desdemona, without knowing the truth. Credulity is the reason that makes Othello becomes jealous, therefore causing a series of problems, leading to the final tragedy. Iago makes a plan that makes Othello jealous and angry. So he uses some coincidences and provides the information that Desdemona cuckolds Othello with Cassio: "That he would steal away so guilty-like, seeing your coming." (3.3.39) Now, Iago starts to make a suspicion of Cassio and Desdemona, and Othello starts to believe Iago and gets mad. Othello is such a credulous man that he believes what Iago tells him, also thinks Iago is an honest man. This is what Iago plans, that Othello believes him but suspect Cassio and Desdemona, therefore becomes jealous. ...read more.

(4.1.46) Jealousy is one of the main themes in this play, and also one of the causes that makes Othello descend from nobility to savagery. As well, in this play, not only is Othello jealous but also other people, for example, Iago. Iago is jealous that Othello promotes Cassio to be a lieutenant but not him, so he starts to hate both Othello and Cassio. He plans to make Othello angry, and jealous. Therefore, the outcome that Othello descends from nobility to savagery is what Iago plans: "I'll pour this pestilence into his ear."(2.3.356) Iago lies to Othello that his wife Desdemona cuckolds him with Cassio and uses many opportunities as he can to prove his lies. Othello believes him and allows the "green-eyed monster."(3.3.166) of jealousy to control him. Othello is jealous of Cassio; he hates Desdemona and he promises he will "tear her all to pieces"(3.3.428), and "chop her into messes"(4.1.202), when he believes that she is unfaithful to him. Further more, what is ironic, Iago tells Othello not to be crazy and jealous, so that Othello believes him more and increases ...read more.

In another hand, instead of comforting Cassio or Desdemona, Othello decides that he is going to kill Desdemona. Also, when Desdemona losses her handkerchief, Iago gets it and gives it to Cassio; Othello does not use his intelligence as usual, to find out why and how does Cassio gets the handkerchief. He believes Cassio has it because Desdemona loves him and gives it to him. Here shows Othello's passion, he does not figure out what happens under the surface, but just believes in what he sees at the end. Even more, passion makes he does not believe Desdemona's explanation. The handkerchief expands his suspicion, Othello turns out to be more passionate, and finally he cannot stands anymore, therefore he kills Desdemona. In conclusion, the influences that causes Othello descend from nobility to savagery are credulity, jealousy and passion; which credulity causes jealousy, and jealousy leads to passion. Therefore causes the final tragedy happens. Word Count: 868 Reference: Shakespeare, William. Othello. United States of America: Penguin Group, 1998. I pledge that this assignment has been written in accordance with the Ashbury College English Department Policy on Academic Honesty. ?? ?? ?? ?? 1 ...read more.