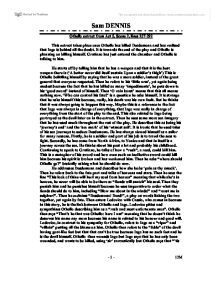 Othello extract from Act 5, Scene 2, lines 257-292 This extract takes place once Othello has killed Desdemona and has realised that Iago is behind all the doubt. It is towards the end of the play and Othello is planning on killing himself. Gratiano has just entered the chamber and Othello is talking to him. He starts off by telling him that he has a weapon and that it is the best weapon there is ('A better never did itself sustain Upon a soldier's thigh') This is Othello belittling himself by saying that he was a mere soldier, instead of the great general that everyone respected. Then he refers to his 'little arm', yet again being modest because the fact that he has killed so many 'impediments', he puts down to his 'good sword' instead of himself. ...read more.

It is ironic that he used tales of his sea journeys to seduce Desdemona. He has always viewed himself as a sailor for many reasons. Firstly, he is a soldier and part of his job is to travel the seas to fight. Secondly, he has come from North Africa, to Venice and that in itself is a journey across the sea. He thinks about his past a lot and probably his childhood. Continuing to speak to Gratiano, he talks of how a "rush", a reed, could kill him. This is a metaphor of his sword and how even such an ineffective sword could kill him because his spirit is broken and has weakened him. Then he asks "where should Othello go?" basically asking what he should do now. ...read more.

Lodovico, in contrast to his sympathy for Othello, refers to Iago as a "viper" and "villain" putting all the blame on him. Othello then refers to the "fable" of the devil having goat-like feet but that that can't be true because Iago has no such feet and he is the devil himself. Othello then wounds Iago but Iago says that he has only been wounded, and wants to be killed, using 'sir' sarcastically but Othello says that "'tis happiness to die" referring to his sorrow about Desdemona. Lodovico, still full of respect for what Othello once was, asks him "what shall be said of thee?". Othello answers that he should be remembered for his honour instead of the hate that caused the murder. ?? ?? ?? ?? Sam DENNIS - 1 - 12M ...read more.