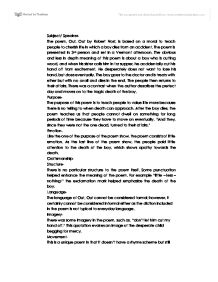 Subject/ Speaker- The poem, Out, Out by Robert Frost, is based on a moral to teach people to cherish life in which a boy dies from an accident. The poem is presented in 3rd person and set in a Vermont afternoon. The obvious and less in depth meaning of this poem is about a boy who is cutting wood, and when his sister calls him in for supper, he accidentally cut his hand off from excitement. ...read more.

After the boy dies, the poem teaches us that people cannot dwell on something for long periods of time because they have to move on eventually. "And they, since they were not the one dead, turned to their affairs." Emotion- Like the one of the purpose of the poem show, the poem consists of little emotion. As the last line of the poem show, the people paid little attention to the death of the boy, which shows apathy towards the death. ...read more.

Imagery- There was some imagery in the poem, such as, "don't let him cut my hand off." This quotation evokes an image of the desperate child begging for mercy. Movement- This is a unique poem in that it doesn't have a rhyme scheme but still enables the poem to flow smoothly. It includes a number of long and short lines too. Sensory Images- Sensory images in this poem is pervasive, just to name one example, "and made dust and dropped stove- length sticks of wood" invokes not only an image of wood and nature but also a scent of wood dust. ?? ?? ?? ?? ...read more.