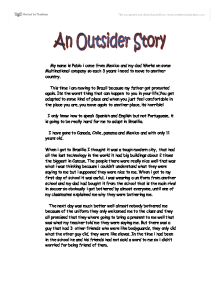 My name is Pablo i come from Mexico and my dad Works on some Multinational company so each 3 years i need to move to another country. This time i am moving to Brazil because my father got promoted again. Its the worst thing that can happen to you in your life,You get adapted to some kind of place and when you just feel comfortable in the place you are, you move again to another place, its horrible! I only know how to speak Spanish and English but not Portuguese, it is going to be really hard for me to adapt in Brasilia. I have gone to Canada, Chile, panama and Mexico and with only 11 years old. When i got to Brasilia I thought it was a tough modern city, that had all the last technology in the world it had big buildings about 2 times the biggest in Cancun. ...read more.

The next day was much better well almost nobody bothered me because of the uniform they only welcomed me to the class and they all promised that they where going to bring a present to me well that was what my teacher told me they were saying me. But there was a guy that had 3 other friends who were like bodyguards, they only did what the other guy did, they were like slaves. In the time i had been in the school he and his friends had not said a word to me so i didn't worried for being friend of them. 1 year passed and i felt adapted to the situation, i was still not friend of those 4 guys but i didn't even talked to them, the only thing i knew about them was that they were good at soccer and they loved to see soccer matches live. ...read more.

At the next day in the soccer match the 4 guys were shouting and cheering to brazil they even insulted the opponents players. When the match finished the guy that controlled the other 3 said to me that thanks and that it was good to know me suddenly i felt comfortable in Brazil and i had already learned Portuguese when my dad tells me that we are moving to Rio de Janeiro. I cried and begged to him to stay here when my dad agreed because he didn't needed so much money for a promotion he only needed me and him to be happy, no more. At the next day i felt so happyin my school i was friend of everyone and almost everybody knew me at least i was going to be happy i loved it! ...read more.