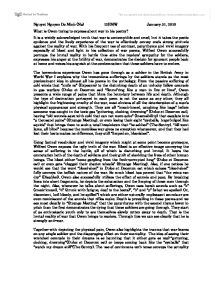 What is Owen trying to express about war in his poetry? It is a widely acknowledged truth that war is contemptible and cruel, but it takes the poetic opulence and the lively experience of the war to effectively convey one's strong attitude against the reality of war. With his frequent use of contrast, para-rhyme and vivid imagery especially of blood and light in his collection of war poems, Wilfred Owen successfully portrays the brutal reality in battle thus stirs the readers' sympathy for the soldiers, expresses his anger at the futility of war, demonstrates the disdain for ignorant people back at home and voices his anguish at the condemnation that these soldiers have to endure. The horrendous experience Owen has gone through as a soldier in the British Army in World War I explains why the tremendous sufferings by the soldiers stands as the most predominant idea in almost all his poems in the anthology. From the passive suffering of cold winds that "knife us" (Exposure) to the disturbing death of an unlucky fellow comrade in gas warfare (Dulce et Decorum est) "flound'ring like a man in fire or lime", Owen presents a wide range of pains that blurs the boundary between life and death. Although the type of destruction portrayed in each poem is not the same as any other, they all highlight the frightening cruelty of the war, most obvious of all the deterioration of a man's physical appearance and strength. ...read more.

The image of "purgatorial shadows" (Mental Case) is typically Dantean that emphasizes the tortuous experience of the veterans. By doing this, Owen is both trying to convey the hellish experience of being in the war as if they were punished for their guilt and expressing his certainty of arrival in Hell even after the soldiers have escaped from the battlefield. This implicitly disapproves the participation of these soldiers in the war, saying that their sufferings is the condemnation for their crime, because by the time a soldier is killed, he is already a "devil's sick of sin" (Dulce et Decorum est). Born into an Evangelical family, Owen unsurprisingly echoes some religious reference in his poems. The "devil's sick of sin" above is a good example. Besides that Owen also acknowledges that the soldiers are going through adversity because "love of God seems dying" (Exposure). To him, war is a sin against the will of his God which angers Him so much that he ceases to be benevolent to the small creatures of his Creation. In The Sentry, the exclamation "I see your lights!" and the reply "But ours had long died out" opens itself to some interpretations. The lights that the ill-luck soldier has seen bear the connotation of the light at the end of the tunnel, an escape from the despicable life into death. But the others' lights, their hope and faith, have ceased to exist. Thus we can see in Owen's eyes, war is a crime that defies the will of God and is worth condemning as it brings all the soldiers under the curse as well. ...read more.

All these pains and suffering do not bring anyone anywhere. It only turns a "brother" into an enemy which gets "jabbed and killed" (Strange Meeting). It involves lengthy days of waiting although it is clear that "nothing happens". The question "What are we doing here?" (Exposure) can be taken as both the query for the purpose of their night duties or the questioning of the point of the war itself. The suffering in the middle of the war, the post-war sense of loss for such futile dispute makes a complete picture of the "pity of war" that Owen tries to depict in his collection of poems. He forthrightly dismisses the sentimental description of the soldiers as "flowers for poets' tearful fooling" or merely "gaps for filling" (Insensibility). Neither does he approve of such false promises as "jeweled hilts, daggers in plait socks, smart salutes" (Disabled) or "the old Lie: Dulce et Decorum est pro patria mori". It is ultimately deception which lures "innocent" civilians into the horrendous battle. He is convinced that the propaganda can only fool "children ardent for some desperate glory" and the deception is too thin a mask for the callous reality of war. All in all, Owen is a strongly anti-war poet who has clearly establishes his stance on the distressing and repugnant reality of war. With a combination of various devices, notably para-rhyme, contrast and vivid imagery, Owen has both offered a factual account of war and voiced his anger towards war-the crisis, the crime of humankind. ?? ?? ?? ?? Nguyet Nguyen Do Minh (Na) 12EMW January 31, 2010 ...read more.