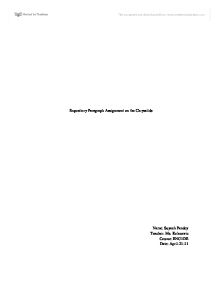 Expository Paragraph Assignment on the Chrysalids Name: Suyash Pandey Teacher: Ms. Kolacevic Course: ENG1DE Date: April-21-11 Mr. Strorm's arrogant pride and his obsession with power have turned him into a narrow-minded and heartless man. With these unimaginable characteristics, Mr. Strorm has dedicated his life to look for deviations in his society. For instance when he saw the Great-Horses he knew they were not the creation of God. "The moment he set his eyes in the huge creatures standing twenty-six hands at the shoulder, he knew they were wrong." ...read more.

But in reality the only rules he knows are the rules in the Repentenances. This is how obsession with power has corrupted him into a narrow-minded person. Joseph got extremely ferocious when he was told the reason why the horses were passed. "One of those brutes could do the work of two maybe three ordinary horses and for less than double the feed of one. There is good profit there, a good incentive to get them passed-" (Wyndham 3) This verifies that Joseph is jealous of Angus because both of them are rivals and now Angus was an advantage to step it up with the horses. ...read more.

"Who was this child-this Blasphemy you were with yesterday." (Wyndham 51) This signifies that the father has no humanity left inside of him. So, arrogant pride has caused this man to become heartless. After the inspector came Joseph decided to get the truth out David by torturing him. "I will deal with this. The boy is lying... Go to your room... My father followed, picking up a whip that table as he came." (Wyndham 51) This signifies that Mr. Strorm can go through any height to get information even if it means to beat his own. This is how obsession with power has made Joseph heartless too. ...read more.