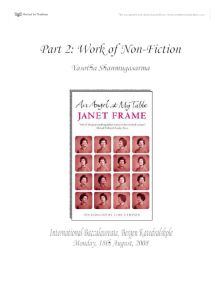 Summary of "An Angel at My Table" "An Angel at My Table" is the second volume of the autobiography out of the trilogy by Janet Frame (1924-2004). The plot of the story was set in several parts of New Zealand, especially in Dunedin, Oamaru and Willowglen. However, the character was not in one place but moved from place to place. In this volume, there is emphasis on Frame's passion for literature and her role in her family, mentality as a student and the success of becoming a writer. She was born on August 28, 1928, to Lottie and George Frame in Dunedin on the east coast of South Island and was the third of five children. Her father was a poor railway engineer and her mother's family (known as the Godfrey's) were established in Picton. She was brought up in Oamaru which was on the eastern coast of South Island. Her brother, George (known as Bruddie in the autobiography), was affected by epilepsy and two of her sisters, Myrtle and Isabel died at a young age by drowning which were separate accidents in 1937 and 1947. These traumatic events distressed Frame that turned out as the consequences in her life and left traces of them in her writing. The story starts when Janet Frame moves in with her Aunty Isy and Uncle George in Number Four Garden Terrace in Dunedin after living in Oamaru in Fifty-Six Eden Street. There she began training as a teacher at the Dunedin Teachers' Training College while at the same time taking courses in English and French at the University of Otago Teachers Training College (1943 -44). This was a period when war was on the process. ...read more.

She was desperately unhappy because of the family tragedies and found herself trapped in the wrong career of being a schoolteacher. Her only escape appeared to be in obedience to the society's judgement of her as abnormal. Therefore, her personality became more isolated. She spent four and half years out of eight years imprisoned in mental hospitals. The part where she is in mental hospitals is a miraculous survival of the horrors and the brutalising treatment she had to face in the unenlightened institutions. When she was scheduled to have a leucotomy, she was horrified at this, and not convinced by the doctors' reassurances that the operation would make her normal. But fortunately, she was saved from leucotomy by her writing skills of The Lagoon. She returned back to the society, but not as a misfit this time. She sought for support and company of writers and set out to achieve her goal of becoming a writer. Possible links between the book and Mrs. Dalloway The main link between this book and Mrs.Dalloway is the term, modernism. The term is used to identify new and distinctive features in the subjects, concepts and styles of literature. The time period of the use of this term was in the early decades of the twentieth century, but it was greatly used after World War I (1914-1918). The three important intellectual precursors of modernism are Friedrich Nietzsche, Karl Marx and Sigmund Freud. They questioned the certainties of traditional conventions of social organisation, religion and morality, and the ways of conceiving the human self. In An Angel at My Table, Janet Frame mentions Sigmund Freud in many parts of the book and even names her cat, Sigmund. ...read more.

Before I read this book, my views on psychological problems were not so strong but I thought of their causes. My first thought went to the proverb, "Prevention is better than cure". If Janet Frame's family had cared for her or talked to her as a family, she would not have had to face the horrors of the mental hospitals. This has caused a negative effect on the main character. The relationship with her family has made Janet Frame to distant away from them and therefore, she studied abroad and away from the people she knew. Another problem she had was timidity. This emotional problem has had a greater effect on me because I have had similar problems with timidity around other people when I was younger. Due to some motivation, I had been able to get out of it to become a more confident person. In this book, Janet Frame was not given the same motivation by her family or by the people around her which was a reason for why she kept her thoughts and feelings to herself. It has not only made her isolated but has also led to a bigger problem of schizophrenia. Some parts of this book have made me realize how small emotional problems can become greater problems in life and success can only be gained if we hold on to our ambition. According to the book, Janet Frame kept her passion for literature and had a strong ambition in becoming a writer. Towards the end of the book, she seems to have recovered from schizophrenia because she became confident when Frank Sargeson gave all his help in order for Janet Frank to become a writer as himself. In my opinion, the book portrays the versatility and the path to opportunities of life, and how certain decisions could change an instant of a situation. ...read more.