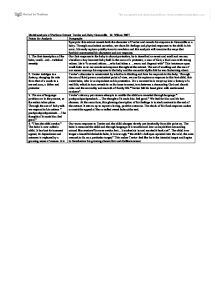 Model analysis of Perfume Extract Terrier and Baby Grenouille M. Wilson 2007 Points for Analysis Paragraphs Synopsis: this extract reveals both the character of Terrier and reveals his response to Grenouille as a baby. Through omniscient narration, we share his feelings and physical responses to the child in his arms. His early rapture quickly turns to revulsion and this analysis will examine the ways that Suskind constructed his characters and our response. 1. The first description of the babe, small...red...twitched sweetly Our first response to the baby is almost protective, he is described as sweet and small and we can visualize a tiny innocent baby held in the arms of a protector, a man of God, a kind man with strong values. He is "a normal citizen....who had taken a ...warm and fragrant wife" This insistence upon smell links us to our emotional response throughout the extract. The act of smelling and the use of our senses conveys his response to the baby and the romantic idyllic life he was fantasizing about. 2. Terrier indulges in a fantasy, changing his role from that of a monk to a normal man, a father and protector Terrier's character is constructed by what he is thinking and how he responds to the baby. Through the use of third person omniscient point of view, we see his rapturous response to this lost child, this sweet babe, who is so dependent on his protection. ...read more.

The reader is revolted by the physical description. We can perceive a picture of an ugly, blinded mole like child, who squints, sniffs and targets Terrier. The reader can share in his appalled response as the child awakens and behaves in a rodent like manner. Thereby destroying his fantasy and making his protection unnecessary and indeed threatening his spiritual and psychological well being. 6. The use of language is fairly modern yet set in an 18th C setting. Suskind uses modern expressions and language to create the character of Grenouille. An example of this is " poohpoohpoohpeedooh", and the almost scientific description of : "The eyes...oyster grey and creamy opal white covered with a ....slimy film" which create an immediacy and a sensory perception of the child. 7. "The nose seemed to fix on a particular target...he himself...was that target." Terrier's growing sense of unease foreshadows his rejection of the child as he thinks, "The nose seemed to fix on a particular target...he himself...was that target." This ominous description of Terrier's growing panic makes us feel extremely uncomfortable. He appears to be an ignorant man, we are modern readers, yet Suskind has managed through the use of sensory images to make us feel uncomfortable and to empathise with Terrier. 8. Irony as tiny is juxtaposed with fear The description of the child's nose, waking, seeking, targeting is both similar to the unfolding of a carnivorous flower and a predator. ...read more.

He regarded the babe/child/it as a creature a non human being A threat to his spiritual and physical wellbeing "A strange, cold creature lay there on his knees, a hostile animal... he would have hurled it like a spider from him." Terriers final rejection of Grenouille was significant on many levels. This may have been the only chance of a normal upbringing or real affection lost. It creates a Gothic like fear of the unknown, the rejection of people who do not fit in or conform. There is a gap between the values of the church dogma and the rights of the individual as this child is not a person, it becomes a monster in the eyes of the monk. The reader is encouraged to support Terrier's decision to reject the child, yet with the advantage of a modern upbringing, it seems inhuman to totally abandon an innocent child regardless of how strange they look or behave. At this stage the beginning is juxtaposed with the ending. The idyllic father/son image is destroyed and a spider/rodent like child has emerged from the cocoon of our literary expectations. Conclusion Suskind's text introduces both characters, themes and conflicts. We see the emergence and transformation of Grenouille's character, like a butterfly he is transformed from a baby to a spider. Our response changes from empathy to horror. His eventual fate is set by this earlier abandonment on so many levels. ...read more.