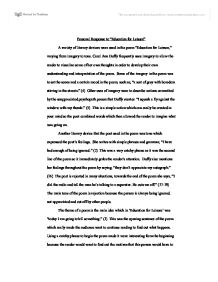 Personal Response to "Education for Leisure" A variety of literary devices were used in the poem "Education for Leisure," varying from imagery to tone. Carol Ann Duffy frequently uses imagery to allow the reader to visualize some of her own thoughts in order to develop their own understanding and interpretation of the poem. Some of the imagery in the poem was to set the scene and a certain mood in the poem, such as; "a sort of grey with boredom stirring in the streets." (4) Other uses of imagery were to describe actions committed by the unappreciated psychopath person that Duffy creates: "I squash a fly against the window with my thumb." ...read more.

Duffy also mentions her feelings throughout the poem by saying, "they don't appreciate my autograph." (16) The poet is rejected in many situations, towards the end of the poem she says, "I dial the radio and tell the man he's talking to a superstar. He cuts me off." (17-19) The main tone of the poem is rejection because the person is always being ignored, not appreciated and cut off by other people. The theme of a poem is the main idea which in 'Education for Leisure' was "today I am going to kill something." (1) This was the opening sentence of the poem which really made the audience want to continue reading to find out what happens. ...read more.

Throughout the poem one discovers that this person is opposing the idea of Shakespeare who is recognized, and does not understand him as they refer to Shakespearian language as the language of the dead "Shakespeare. It was in another language." (8) The poem is written in a unique style; it makes one think about life and how the people that are never noticed must feel. 'Education for Leisure' is filled with feelings that express rejection and all the things a person does, for example; "I walk the two miles into town for signing on. They don't appreciate my autograph." (15-16) This shows that the person put a lot of effort into something and still got rejected; it is the reality of the world in many situations. Word Count - 504 ...read more.