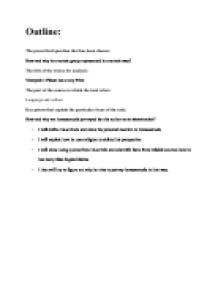 Persuasive Article Language Analysis. How and why are homosexuals portrayed by Mohamed Sibai as an abomination?

Outline: The prescribed question that has been chosen: How and why is a certain group represented in a certain way? The title of the text(s) for analysis: Viewpoint: Please me at any Price The part of the course to which the task refers: Language and culture Key points that explain the particular focus of the task: How and why are homosexuals portrayed by this author as an abomination? - I will define his attitude and show his personal reaction to homosexuals - I will explain how he uses religion to defend his perspective - I will show using quotes from his article and scientific facts from reliable sources how he has many false logical claims - I then will try to figure out why he tries to portray homosexuals in that way. Article: Source: Outlook (AUB Campus News Paper) Name: Please me at any Price Author: Mohamad Sibai Date published: May 4th 2012 The other day, I saw a couple holding hands along Hamra Street. Normally I would never look twice, but something was not right. They both had short hair, facial hair, and rough voices. The sight was disturbing. Call me sexist, call me whatever you like, I couldn't get that image out of my head for the whole day. ...read more.

still criminalize it. Although Lebanon aims to be the most secular state in the region it still has the famous 534 article of the Lebanese Penal Code which prohibits having sexual relations that are "contradicting the laws of nature", which is punishable by up to a year in prison. LGBT support and rights' groups such as "Helm" exist in Lebanon making it actually one of the most homosexual friendly country in the region, yet like any other Arab country it has a high rate of homophobia. Other Arab countries that follow strict Sharia'a law such as Iran, Mauritania, Saudi Arabia, North Sudan and Yemen, go the extreme of punishing homosexuality with the death penalty. The author is very clearly against homosexuality himself, he states in the first two lines that he saw something out of the ordinary on the street: "Normally I would never look twice" then he displays his prejudice by saying: "but something was not right". He does that to anticipate the reader and to set the readers mood that what is about to come is negative. He then projects his point of view again emphasizing on what he saw being negative and shocking in order to get the reader's sympathy by saying: "The sight was disturbing", then saying: "I couldn't believe what I saw". ...read more.

He also mentions that despise the fact that many wars have been fought in the name of religion causing deaths, injuries and loss of money. For his final attempt he then quotes a Russian comedian (not knowing that he is a comedian) to show that a European "liberal" country also criminalizes homosexuality in order to appeal to those that aren't very religious, but his claims are false since that law has been abolished and Smirnoff was not seriously speaking. In conclusion, Sibai attempts desperately throughout the article, to prove his point using many different invalid arguments, and only speaks from one perspective and doesn't show any attempts of being unbiased. He catches people's attentions by talking about his personal reaction for the first paragraph, and then only portrays the views of religion and not science. Even when he mentions science he makes false claims and doesn't site a single source for them. He then desperately uses vague words and illogical and untrue allegations. The article only uses pathos and lacks any signs of ethos and logos, which means that the only audience that would buy into it wouldn't be the intellectuals but rather the boorish. This article simply shows how much work Human Rights groups have to do in these regions. ...read more.