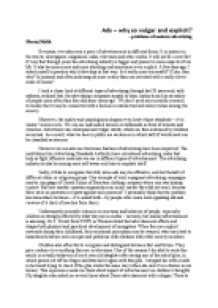 Persuasive Article on the Dangers of Modern Advertisements

﻿Ads ? why so vulgar and explicit? ? problems of modern advertising Maciej Mylik Everyone, everyday sees a piece of advertisement in different forms. It is present in the streets, newspapers, magazines, radio, television and other media. It will not be a new fact if I say that through years the advertising industry is bigger and present in more aspects of our life. It also becomes more and more shocking and sometimes even explicit. A few days ago I asked myself a question why it develops in that way. Is it really more successful? If yes, then why? Is immoral and often sickening ad more catchy than one invented with a really clever sense of humor? I took a closer look at different types of advertising through last 50 years and, with sadness, realized that, the advertising companies appeal to basic instincts such as sexuality of people more often than they did some years ago. ...read more.

One example of such repugnant advertising campaigns may be campaign of United Colors of Benetton clothing company where nun was kissing a priest. But here another question approaches our mind: maybe they did not react, because there were no protests or reports against such practices? I personally think that the problem lies somewhere between ? it?s caused both ? by people who create such appalling ads and viewers of it (lack of reaction from them). Unfortunately scientific research on reactions and behavior of people, especially children is strongly affected by what they see in media ? not only, but mainly advertisement is alarming. Dr S. Kirwil from SWPS in Warsaw stated that advertisement affects and shapes both physical and psychical development of youngsters. When they see explicit materials during their childhood, their emotional perception may be warped, what may lead to hazardous behavior such as rapes and problems with relations with other society members. ...read more.

The only advertisement that affects what I do or buy is an intelligent one. Nowadays, people who work in advertising companies seem to have lost an ability to invent anything using even little intelligence, and instead of it they produce straightforward slogans which are neither persuading nor funny. The only way to face what is present in media and what offends us is to fight with it. If we want to improve standards of modern advertising we have to voice our complaints and disappointment, otherwise even authorities like ASA or CAP won?t even have occasion to help us. Higher standards in advertising may even result in higher standards of communication between people and lead to improvement of environment in which our children grow in. It?s vital, as media shape their minds and characters in that big way. It?s a last call to react, because advertising companies? and lobbies? power is getting bigger and in a minute we will be ?too small? to face them and fight with those abnormal and explicit advertising practices. ...read more.