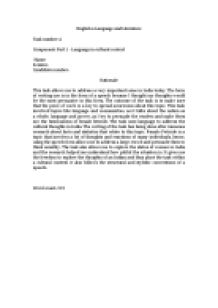 Persusive Writing - It estimated that more than ten million female fetuses have been illegally aborted in India.

﻿English A Language and Literature Task number 4 Component: Part 1 - Language in cultural context Name: Session: Candidate number: Rationale This task allows me to address a very important issue in India today. The form of writing use is in the form of a speech because I thought my thoughts would be the most persuasive in this form. The outcome of the task is to make sure that the piece of work is a key to spread awareness about this topic. This task involved topics like language and communities, as it talks about the nation as a whole; language and power, as I try to persuade the readers and make them see the heinousness of female feticide. The task uses language to address the cultural thoughts in India. The writing of the task has being done after immense research about facts and statistics that relate to this topic. Female Feticide is a topic that involves a lot of thoughts and emotions of many individuals, hence, using the speech form allows me to address a large crowd and persuade them to think sensibly. ...read more.

The social evil which we today have labeled ?Female feticide? in an old age tradition in some areas of the rural India which is a mere connotation of the sinful act of murder. If not the Lord fear our constitution, part three article fifteen states, ?Prohibition of discrimination on grounds of religion, race, caste, sex or place of birth.? And female feticide is an act of discrimination. Discrimination on the bases of sex. This clearly portrays India as a country that has used technology to move backwards. What we see is the culmination of centuries of gender disparity leading to the formation of a fiercely patriarchal society, which believes that the female child is nothing more than a temporary burden. Even today, in this great nation, which we proudly call to be ?rapidly developing? we are unable to escape the clutches of this age-old evil. The thought of a male child enhances the social status is blather. Manu, the Hindu Law Giver, denied autonomy to women, and advised that women should be guarded day and night. ...read more.

Women are treated worse than a plebeian, why are women treated like dirt? Abortion has not only lowered the standard of women in India but also increased the human trafficking levels in the regions where there is a lack of women. A woman bears the future generations and this issue of female feticide is in a way dawning the apocalypse. Girls are still considered liability in India. Parents still prefer a boy than a girl. In majority of families, boys are given better treatment than girls. Boys receive better education. This trend can be seen in every class. This is heinous. If we want India to move advance, we have to forget this redundant mindsets. If we want to among the best, we have to think like them. This primitive reasoning has to go. This problem cannot be sorted out by education or better economic condition only. It requires awareness because it is embedded deep in our psyche. We still believe that only sons carry our genes, in other words our ?Khandan? can only be carried by boys. This type of orthodox mentality can be countered only by proper awareness. Number of words: 821 ...read more.