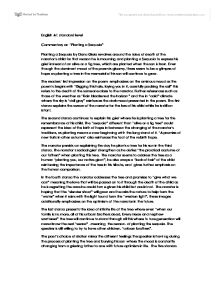 English A1: standard level Commentary on "Planting a Sequoia" Planting a Sequoia by Dana Gioia revolves around the idea of death of the narrator's child for that reason he is mourning and planting a Sequoia to express his grief instead of an olive or a fig tree, which are planted when the son is born. Even though the dominant mood of the poem is gloomy, there seem to be a glimpse of hope as planting a tree in the memorial of his son will continue to grow. The readers' first impression on the poem emphasizes on the ominous mood as the poem's begins with "Digging this hole, laying you in it, carefully packing the soil" this refers to the death of the someone close to the narrator. ...read more.

"A promise of new fruits in other autumns" also reinforces the fact of the rebirth hope. The narrator persists on explaining the day he plants a tree for his son in the third stanza. The narrator's radical grief strengthen as he defies "the practical costume of our fathers" when planting this tree. The narrator seems to address the tree as a human "planting you, our native giant", he also wraps a "lock of hair" of the child reinforcing the importance of the tree in his tribute, and gives further emphasis on the human comparison. In the fourth stanza the narrator addresses the tree and promises to "give what we can" meaning the love that will be passed on to it through the death of the child as he is regretting the care he could have given his child but could not. ...read more.

The speaker is still willing to try to have other children, "unborn brothers". The poet's choice of diction mirror the different feelings the speaker is having during the process of planting the tree and burying his son where the mood is constantly changing from a grieving father to one with future optimism in life. The five stanzas structure contradicts each other as one discusses the death and sorrow while other discusses the rebirth of hope through planting a tree. The sequoia will keep on growing representing the life of the son even after the death of the whole family. The spontaneous dialogue of the father gives a genuine effect as he explains the actions. The ambiguity of the poem and the vague theme of "life" and "death" make a paradoxical effect, which leaves the reader clinging as the poem progresses. ...read more.